Dirk's Revell 1967 Mustang from the TV Show; Spenser, For Hire

Forum rules
Forum Rules For All Members: No posts of any kind containing offensive language or personal insults will be allowed. Also, no pictures depicting full nudity whether in a post or an individual members personal avatar are permitted. Spamming or multiple trolling posts by members in an offensive way are also not permitted. Violations of these basic guidelines will result in Admin taking action starting with a warning and up to a permanent ban from the community for repeat offending members.
Post Reply
3 posts • Page 1 of 1

This is an older build I thought I'd share with you. When i build cars, or any subject for a matter of fact, I usually like to build something I've seen on TV or in the movies. I've even built things from comic books and novels. To me there is something about building a specific car rather then something random. I find this works well for me in order to keep my interest. One of my all time favorite shows was called Spenser: For Hire. The show was based on the books written by Boston based author, Robert B Parker. On the TV series Spenser was your typical TV detective who drove a classic old car. As a hat tip to Steve McQueen and the movie Bullett, the creators of the TV version of Spenser gave him a dark green (1965-66) classic Mustang. When the series ended after 3 seasons, Spenser returned in 4 made for TV movies on the Lifetime Channel. In two of these movies Spenser drove a 1967 Mustang. This is the car I'm going to try and build. 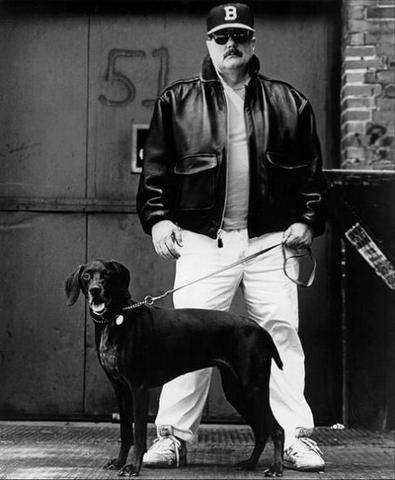 Bob, wrote 40 Spenser novels before his passing in 2010. After he passed his estate hired another author to carry on the Spenser tradition. Ace Atkins, has now written 8 Spenser books.

When the TV series was created back in 1985, actor Robert Urich was cast as Spenser, Avery Brooks was cast as the street-wise black kid who grew up to become a smartly dressed enforcer. Barbara Stock, was cast as the center and anchor of Spenser's universe. 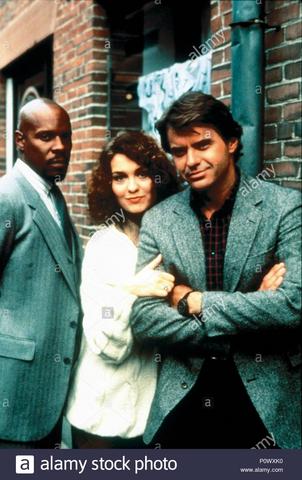 Screen grabs of the show car. 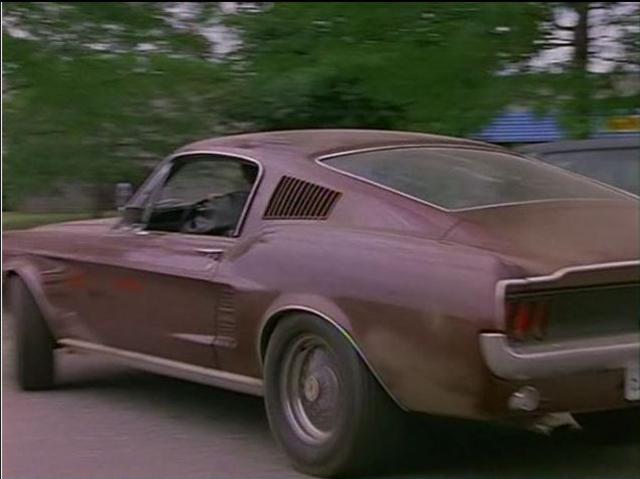 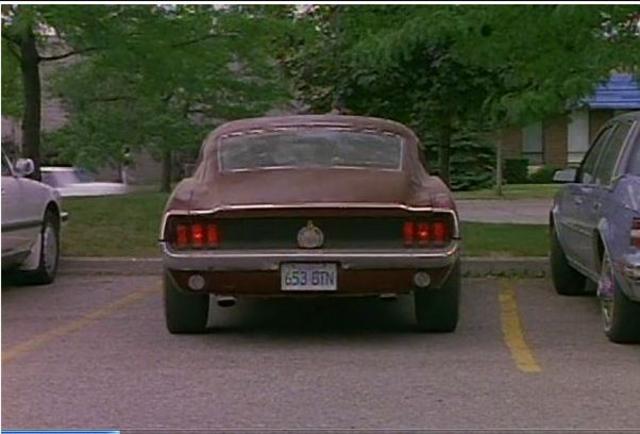 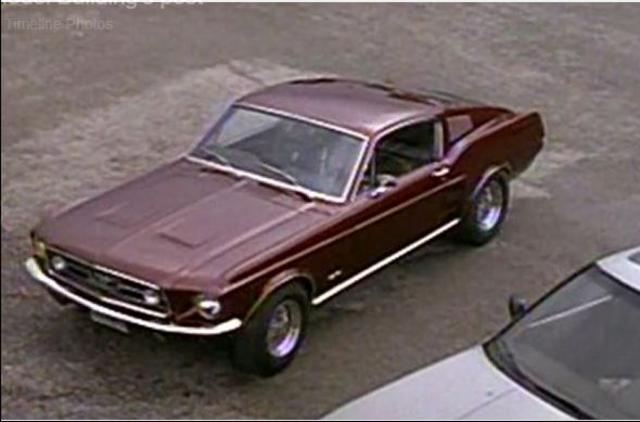 The Spenser movie car was a 67 Mustang with the optional "Exterior Decor Group" option which included a new "breather" hood with functional louvers and built-in turn signal indicator lamps. The AMT kit which was my choice to build this car didn't come with a deluxe hood. However the Revell 68 Mustang did. the 68 hood was was pulled from a Revell 68 Mustang kit which will not need the deluxe hood. JACKPOT!!! 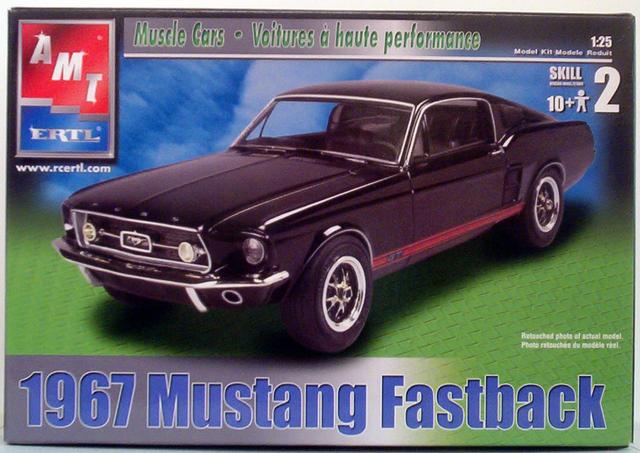 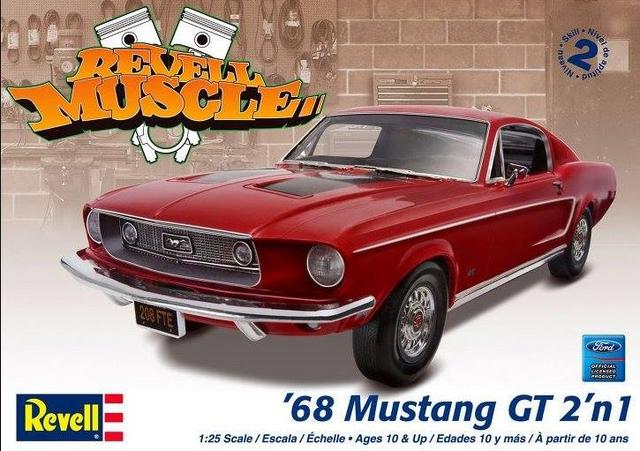 The hood that I need, the detail is pretty good both the top and the underside. Heck, the hood even has the chrome trim for the froward most part of the hood. Something that is missing from most if not all the other kits. 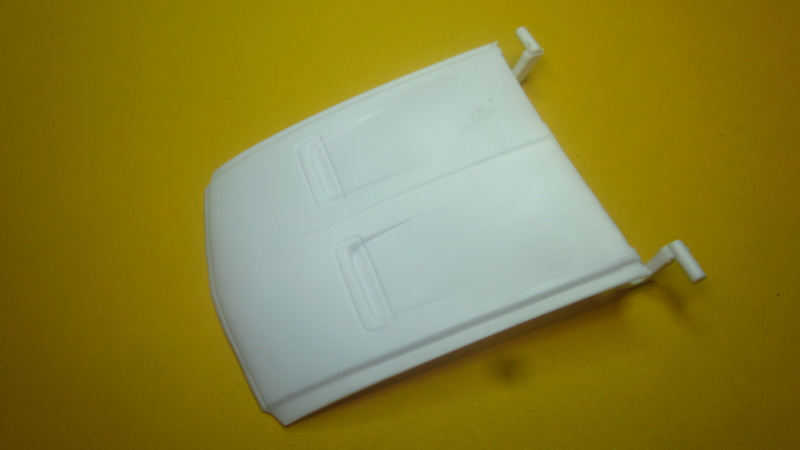 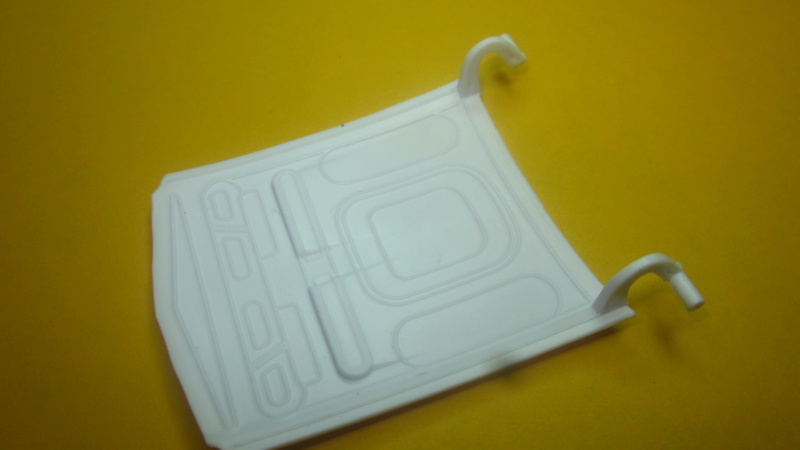 Of course nothing comes easy and the 68 hood doesn't quite fit the 67 body. DAMN!!! 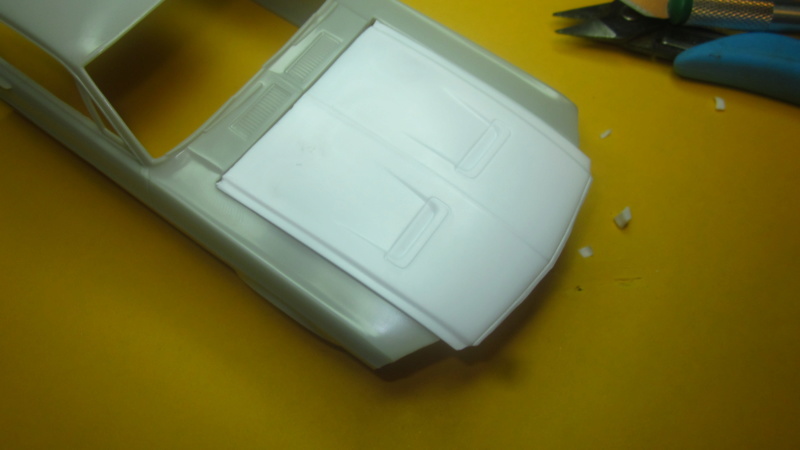 With a few simple measurements I was able to get the 68 hood to fit the 67 body by removing about 1/4 of an inch of the back of the hood and sanding the sides just a tad. 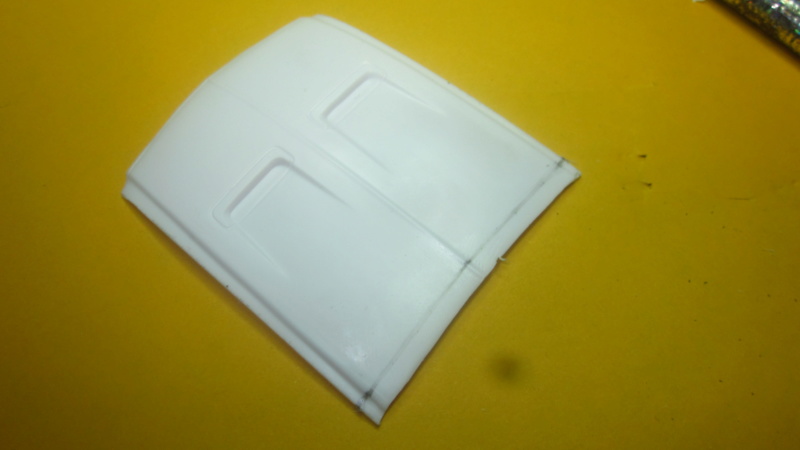 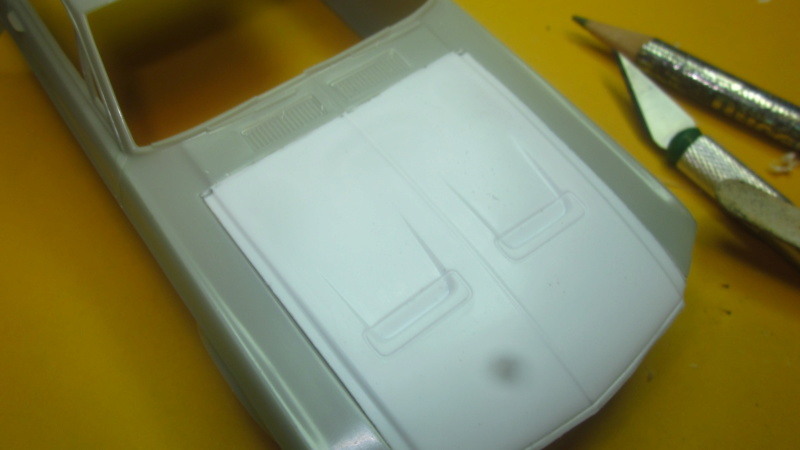 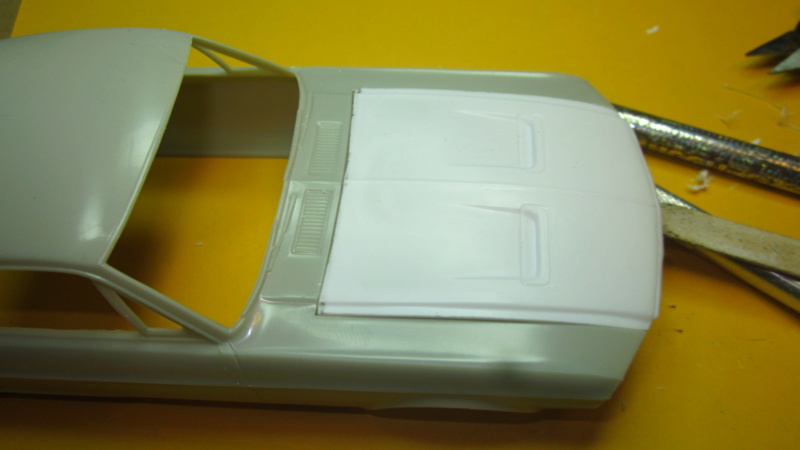 Moving on to the chassis

I painted the underside flat black, and let it dry. I was out of the charcoal that I usually use. 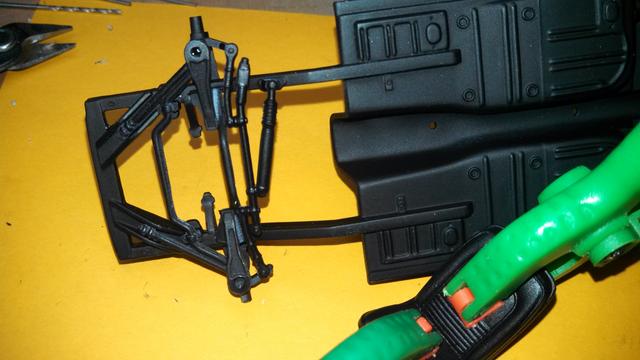 I then flipped it over and set to work detailing the interior. This kit is different then a lot of other kits that come with the interior tub in one piece. In this kit the the interior sides are separate from the bottom floor. While this creates more work for the builder I kinda like it better. This allows the modeler to detail the interior details straight on rather then at an angle. I applied semi gloss black to the interior. I added flocking powder (Kens Kustom Fuzzy Fur) to the floor and the back of the folding rear seat 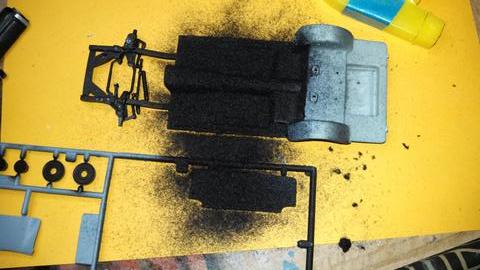 Assembled and detailed the seats 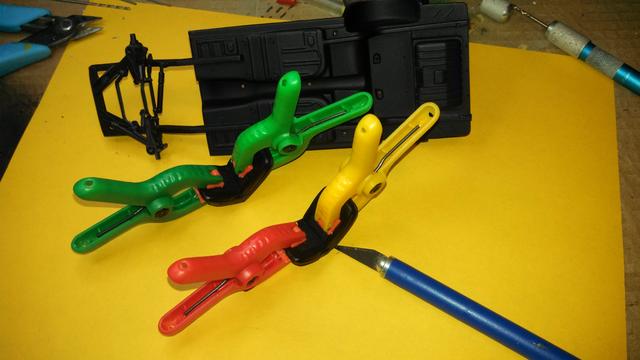 With the interior side walls being separate parts from the floor I find it easier to do detail painting of the trim work. When they were detailed I then assembled the parts 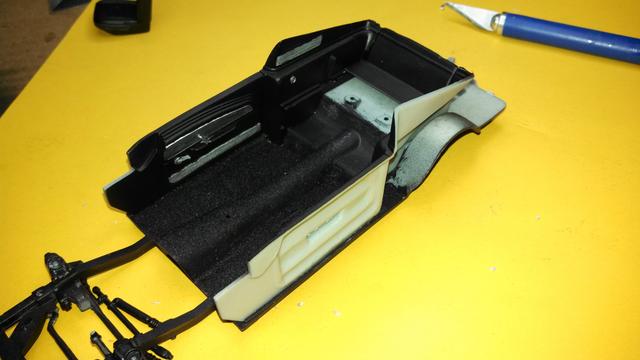 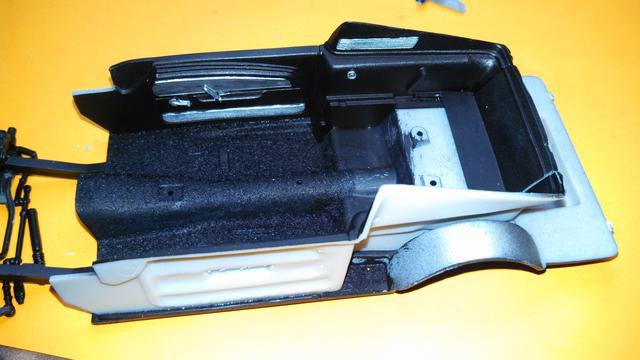 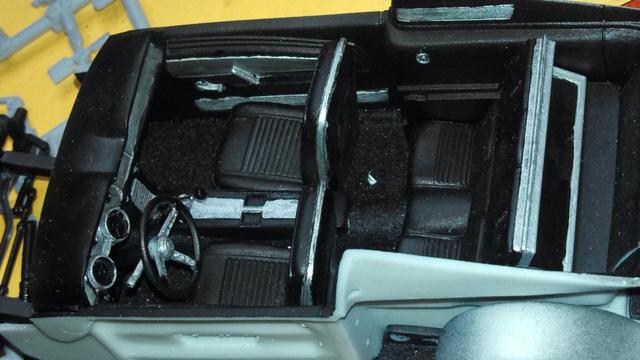 Thanks for looking
.... Dirk