Forum rules
Forum Rules For All Members: No posts of any kind containing offensive language or personal insults will be allowed. Also, no pictures depicting full nudity whether in a post or an individual members personal avatar are permitted. Spamming or multiple trolling posts by members in an offensive way are also not permitted. Violations of these basic guidelines will result in Admin taking action starting with a warning and up to a permanent ban from the community for repeat offending members.
Post Reply
18 posts

Greetings Fellow Builders!
Merry Christmas and Happy New Year! I hope you got many models and model stuffs under your tree this year!
Real life got the best of my posting time but not bench time! It helps when the build is for a Christmas present!

MSgtUSAFRet wrote: ↑
November 23rd, 2019, 3:00 am
The fishing weights are a good idea - I just dont have any. Greg pointed out that the space for the weight is small. Haven't gotten there in the build to find out - so I dont know my idea of a penny will work or not.

It's not that the space is small but rather you need to position the weight in such a way that it's not visible. For the compartment in question has a open doorway allowing you to see inside from the bomb bay. That I didn't want to block off to allow light to pass through to the cockpit and nose. I had to place weight along the interior of the fuselage halves and the underside of the cockpit cockpit floor then painted it green to match the rest of the interior.

Greg, Oh I see! Unfortunately, due to deadlines and haste, I forgot to put the fishing weights in the nose. Not that I didn't buy them - I was so focused on finishing, I didn't place them. :/ Drat!


Dan840 wrote: ↑
December 10th, 2019, 5:25 am
Hey Steve! Nice work so far. A couple of thoughts. Have you checked to see if there are metal landing gear available for this kit? Not sure if there are or not, but worth looking into maybe. Also, While prowling the model/hobby aisle at Hobby Lobby, I noticed different sizes and shapes of aluminum weights used in Pinewood Derby cars. Maybe you could find some appropriate dimensions that would fit from those.
Dan

Dan, thanks for the comments and thoughts. I hadn't thought to look for metal parts for the kit. I should have followed Greg's suggesting and made the landing gear out of brass pipes. Although, how the landing gear attaches would also need a redesign to support the weight, too. Alas, I didn't have time to research either. Another lesson learned. I told my FNL about the weight distribution issue as well and, since he does pinewood derby cars, he made the same suggestion for adding weights to the nose as you did.

Still, I appreciate the tip and comments.

Scott, thanks for the tip. I hadn't thought of that either and I had already sealed the engines when I read this. I do have another airplane build coming up for my SNL and I will think this issue through before I build. Thank for the tip.

Welp, SOOOOO many lessons learned and, prime of which, haste makes waste.
But here are some highlights of the build:

I placed the gunners nest in the body of the plane. I even placed the open window hatch to the fuselage. It was then I realized, I had a decal I should have placed before I glued the piece down. 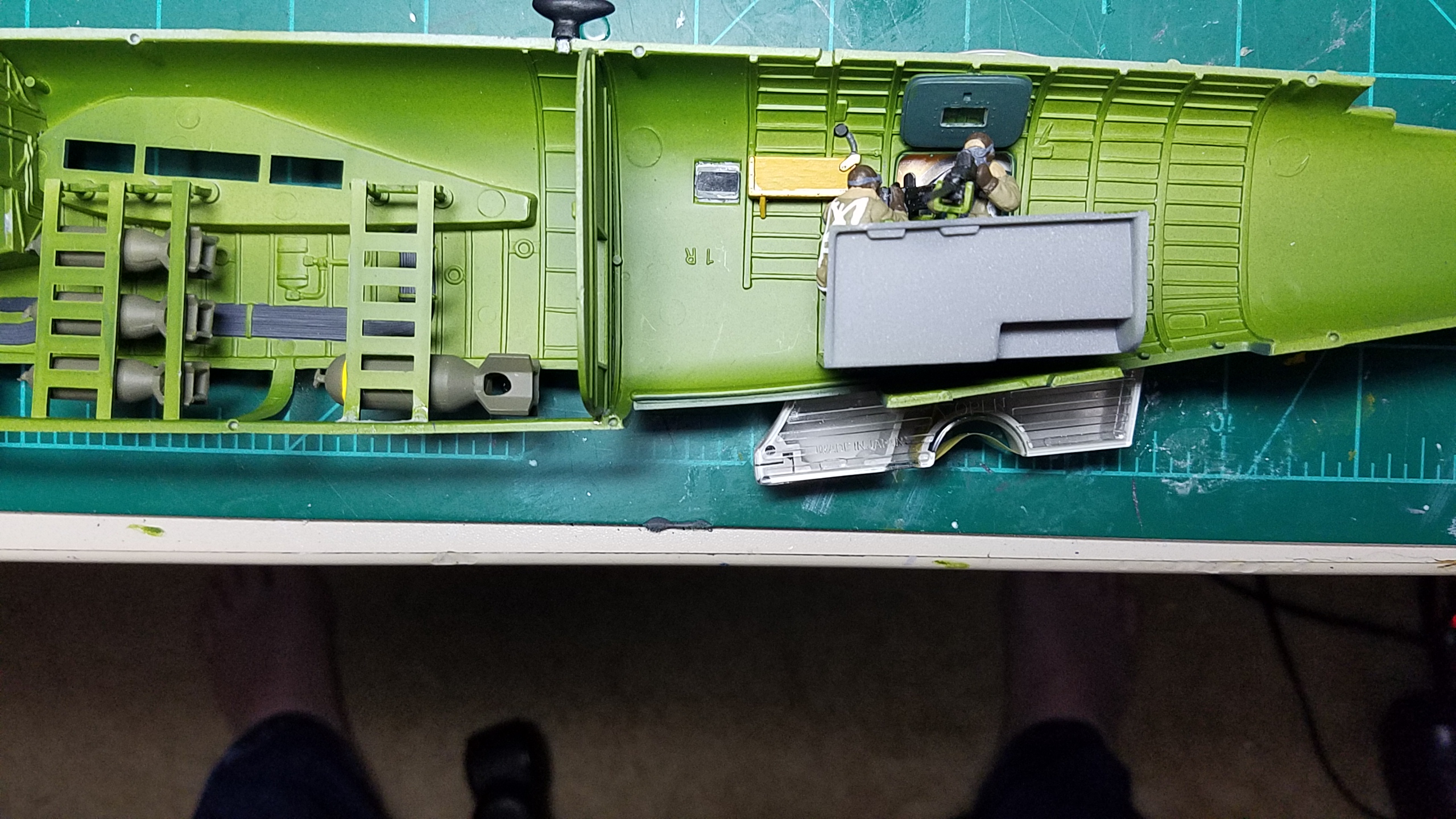 And the decal placed... 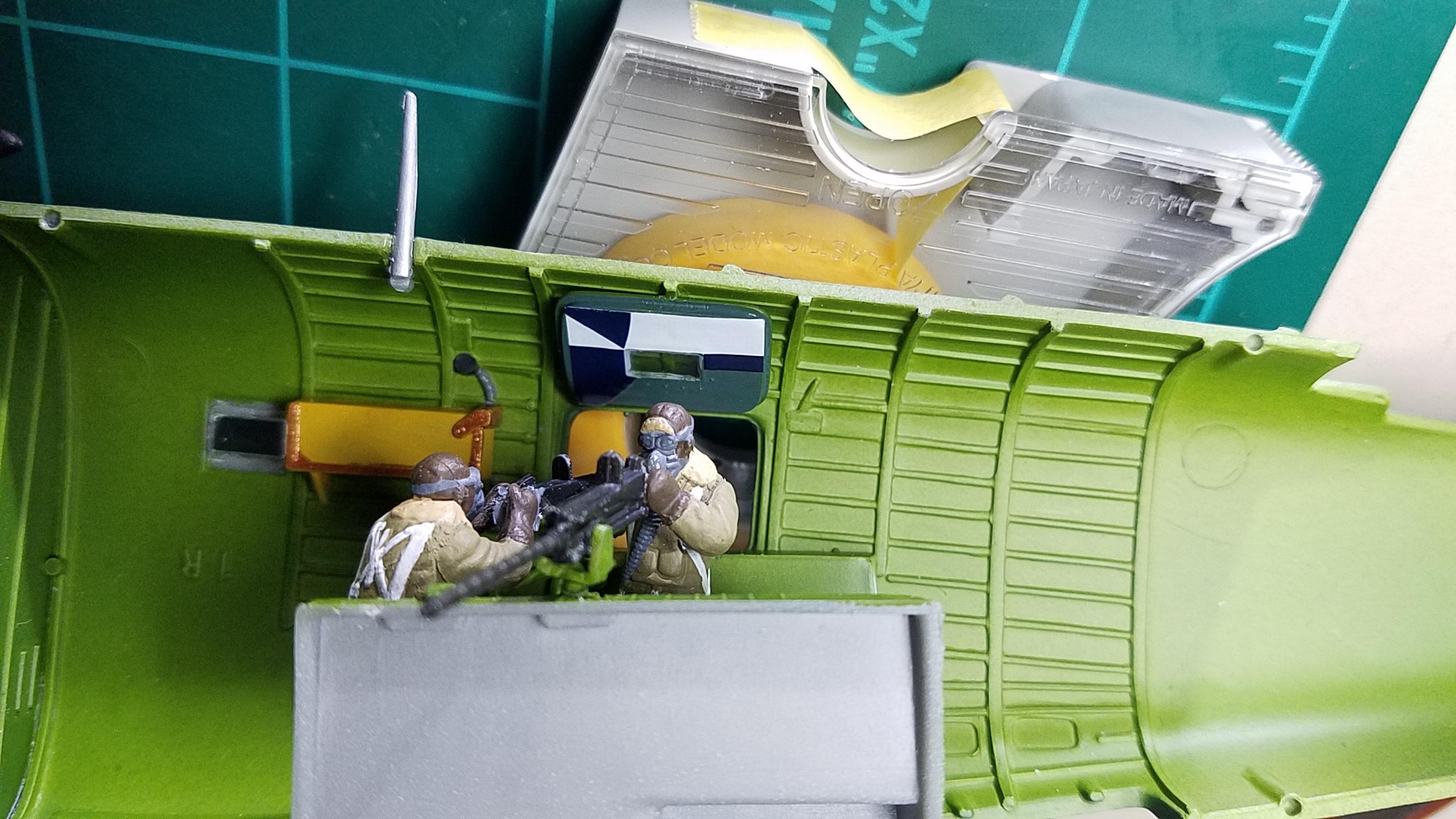 I also placed the cockpit and the bombardier. This was a bit more difficult as there a placement peg in the way. The peg was removed and the piece placed. 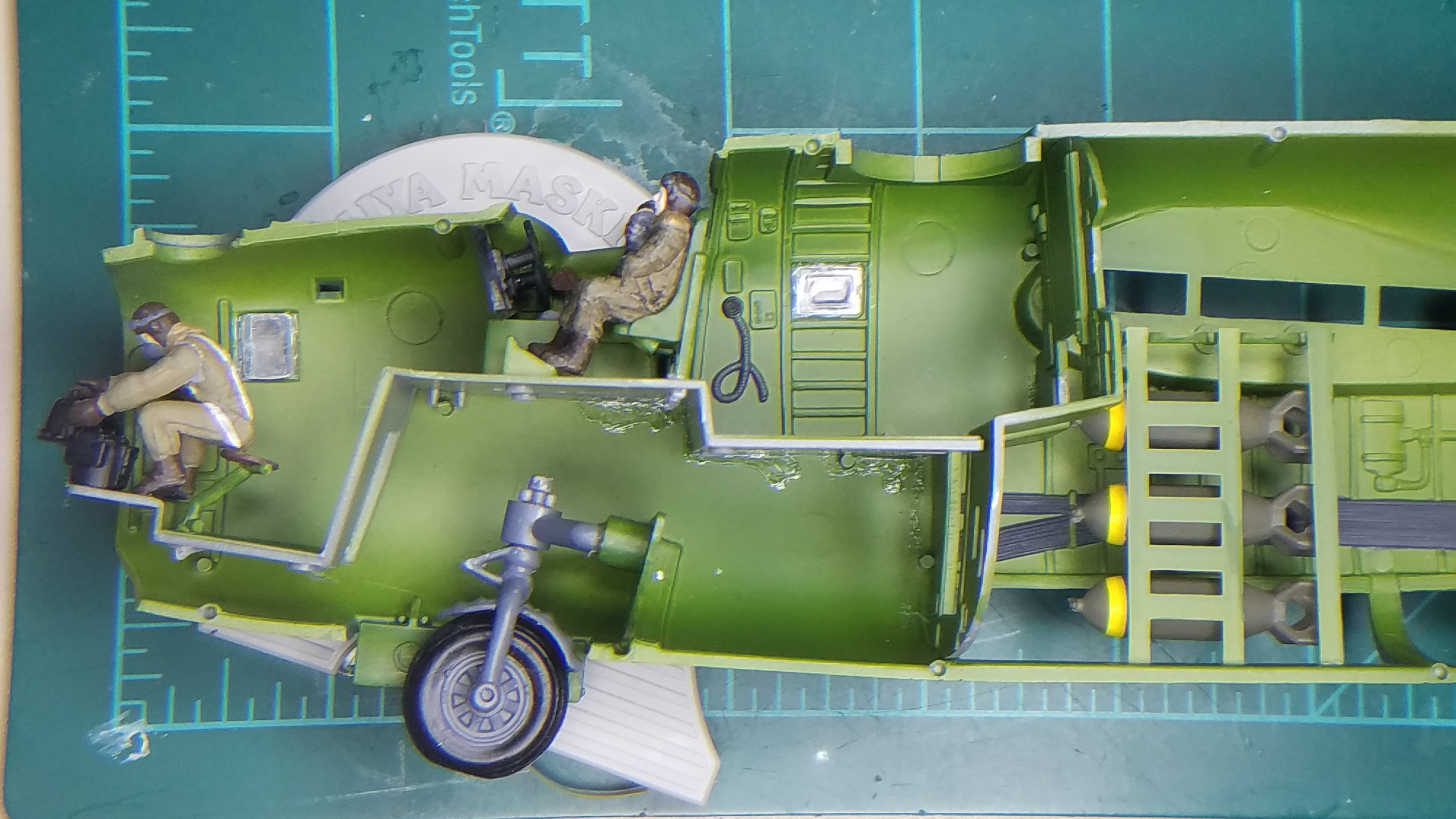 My FNL also said he may try and place weights behind the nose wheel as there seems to be a space between the wheel well and the bomb bay.

I painted the engine facade silver, as shown, but it looked a little too clean. So I added black to the flat surfaces (not engine part) and added a wash to the engine to simulate the oil and grease in the engine. 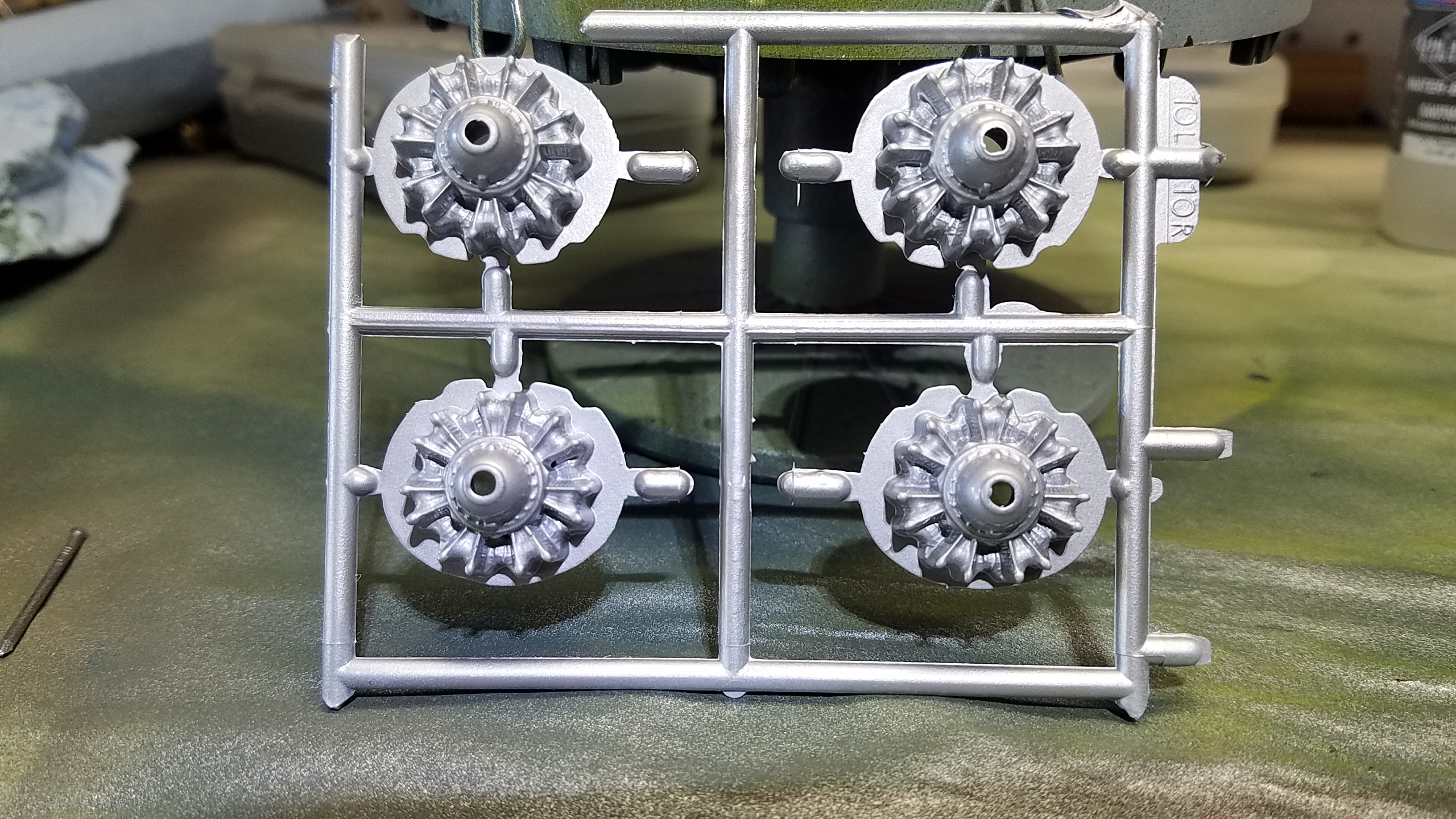 This pic shows a lot of progress. I masked off and painted the ice boots on the wings, painted and place the engine facade and engine cowlings. 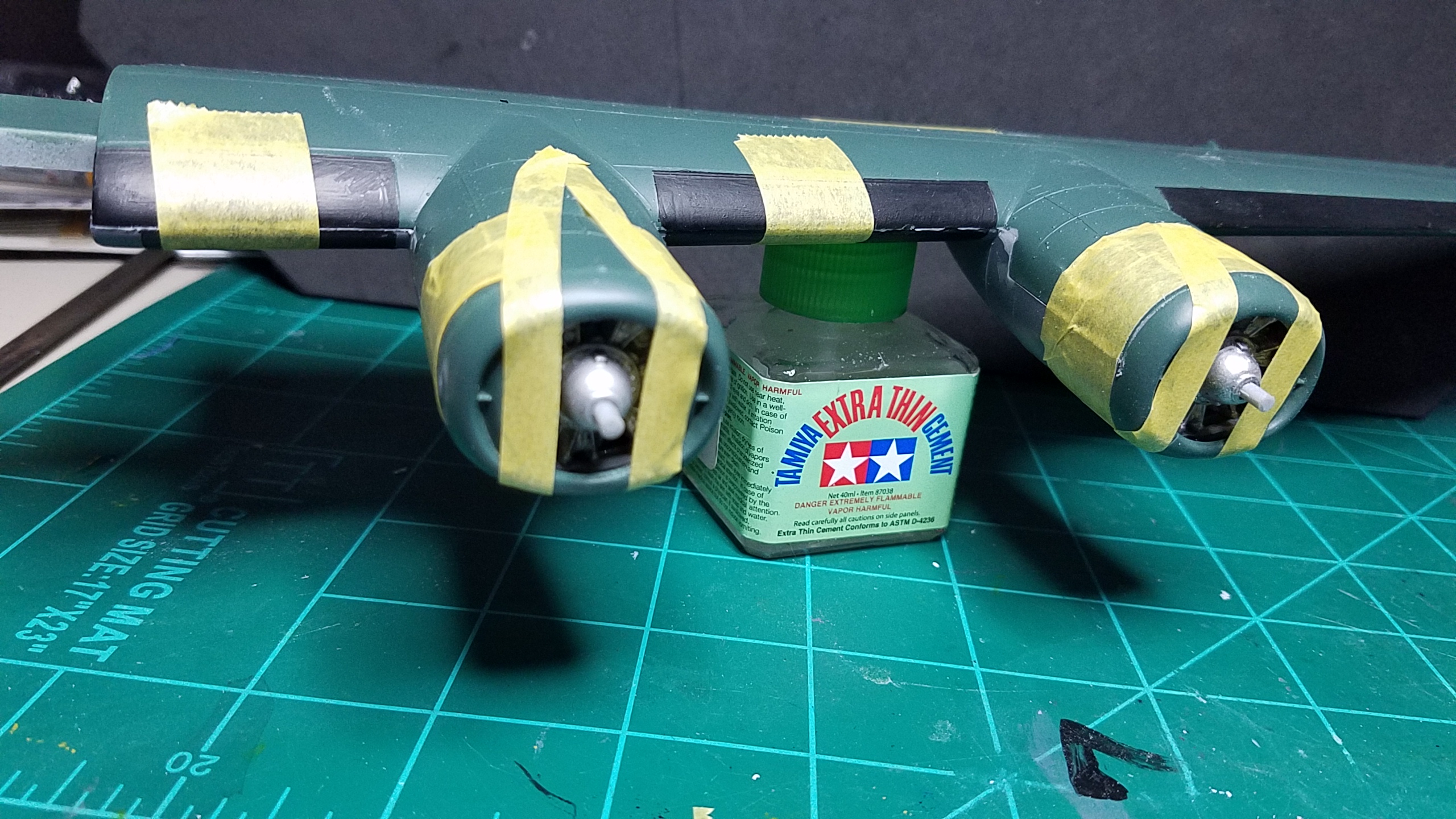 This part was interesting, too. I masked the tail rudders and the tail assembly to paint the ice boots. I had to eyeball the curves as the rudders aren't exactly straight anywhere. Whew! 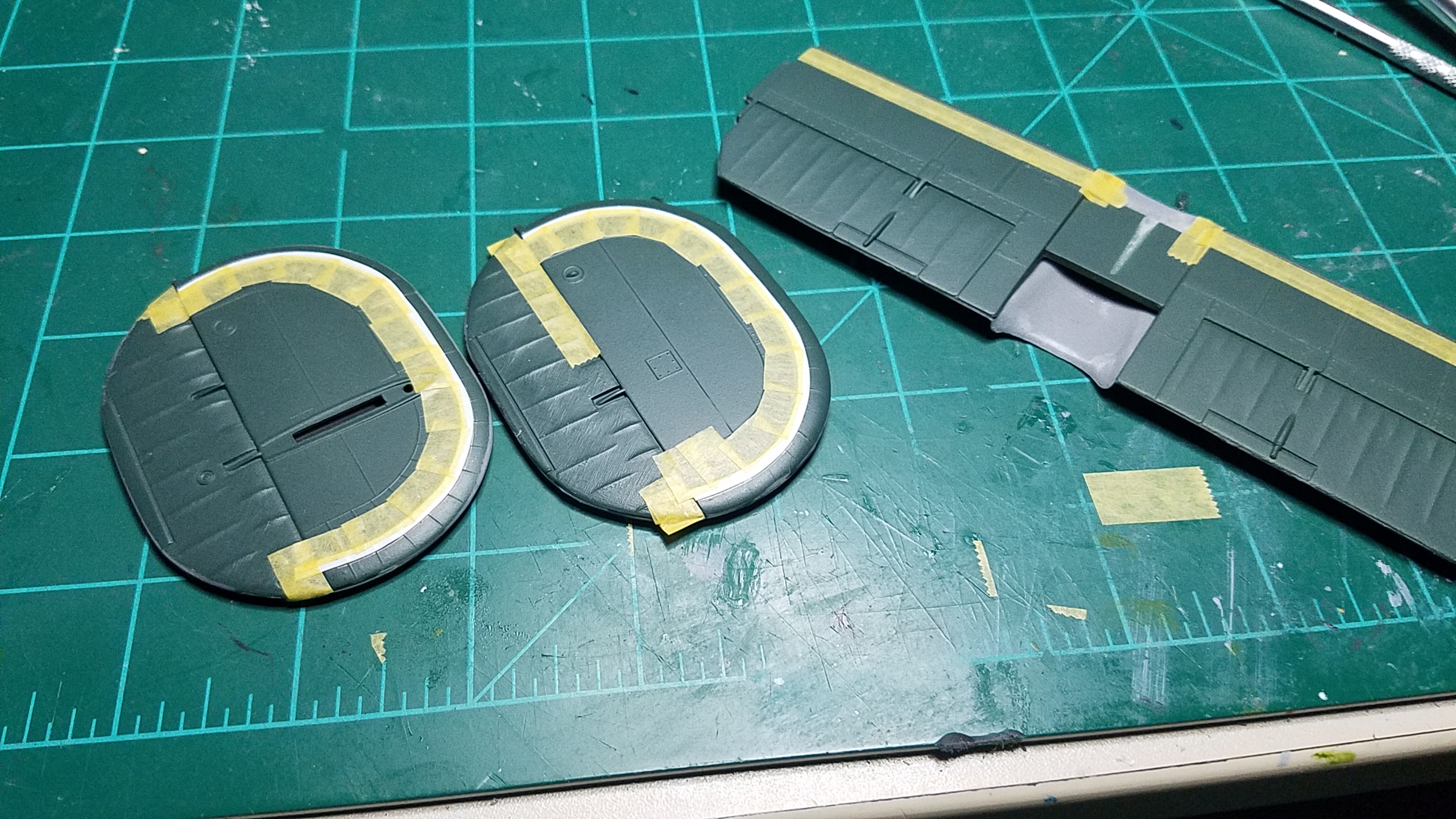 While the tail assembly and rudders were drying, I fitted the wings to the fuselage. I had to modify the wings and the fuselage to get them to seat properly; which involved filing away some of the ice boot paint closest to the hull. But, with patience (NOT!) I finally got them seated. I had to place it vertically on the bench to make sure gravity kept the parts married for the glue to fully cure. 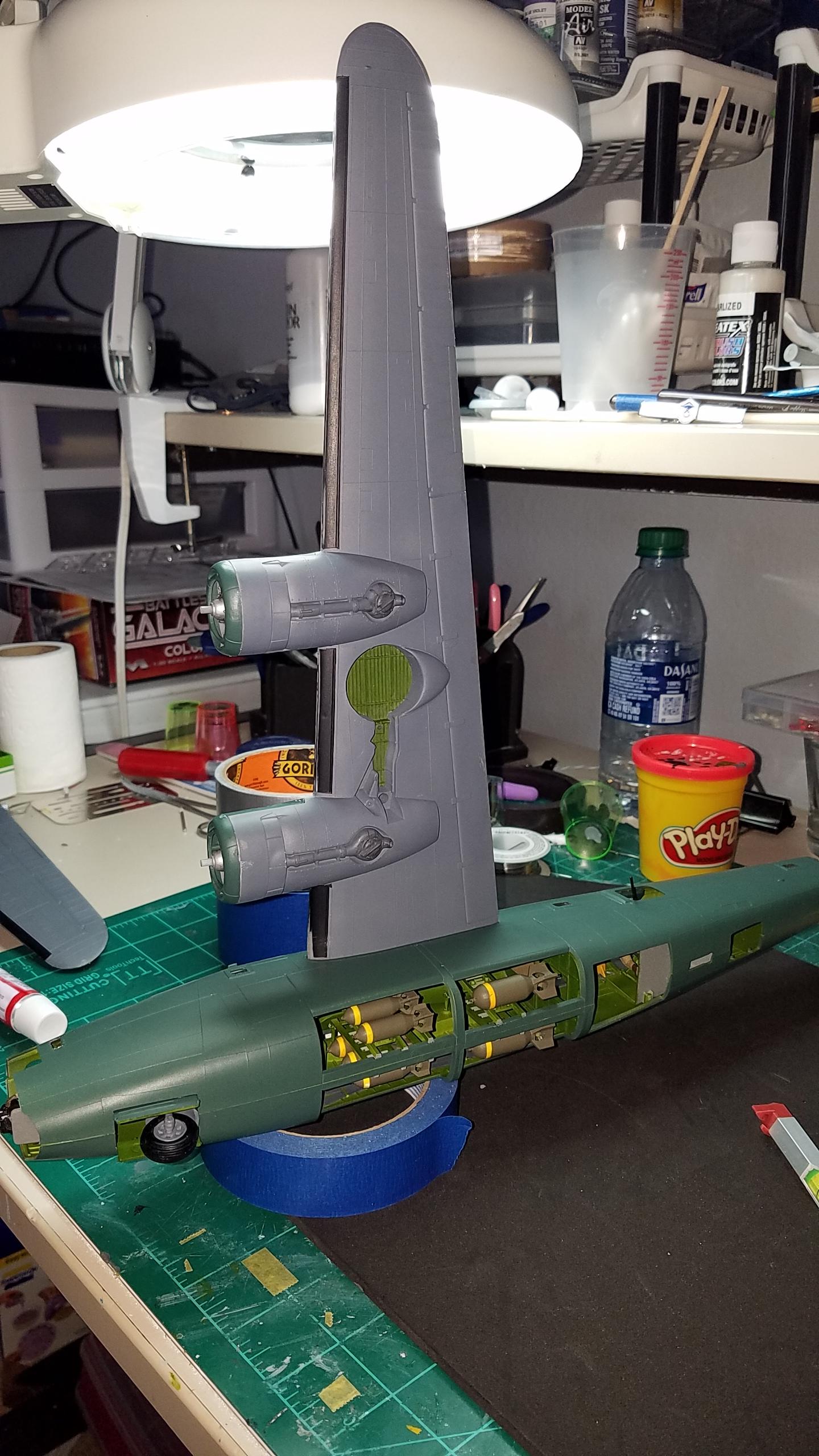 I'll be posting more later but, again and always, thanks for the comments and for reading the posts!
Chat with you later!

Steve
Admirals don't fly; do they...where's the fun in that?!
Top

That is looking amazing Steve. I have done that too with decals. At least it wasn’t too late for you to add it before you seal the beast up.

Everything is just looking top notch.

Greetings All - from the "less cold" South!

Shawn McClure wrote: ↑
December 28th, 2019, 3:56 pm
That is looking amazing Steve. I have done that too with decals. At least it wasn’t too late for you to add it before you seal the beast up.

Everything is just looking top notch.

Thanks Shawn! Yeah, it wasn't too late but it building stuff other than starships, which has decals only on the outside, forced me to think about what needed decals applied before going on to another assembly step. It was like shifting gears on a standard drive car without a clutch!

I dunno how many links I'm allowed to put on one post so I'm gonna test the limits.

Hers's the bird with both wings attached resting on the box. It struck me again that this one model is the largest one I have done to date. Even the Enterprise C didn't take up this much room on the bench; or at least I didn't feel like it did. 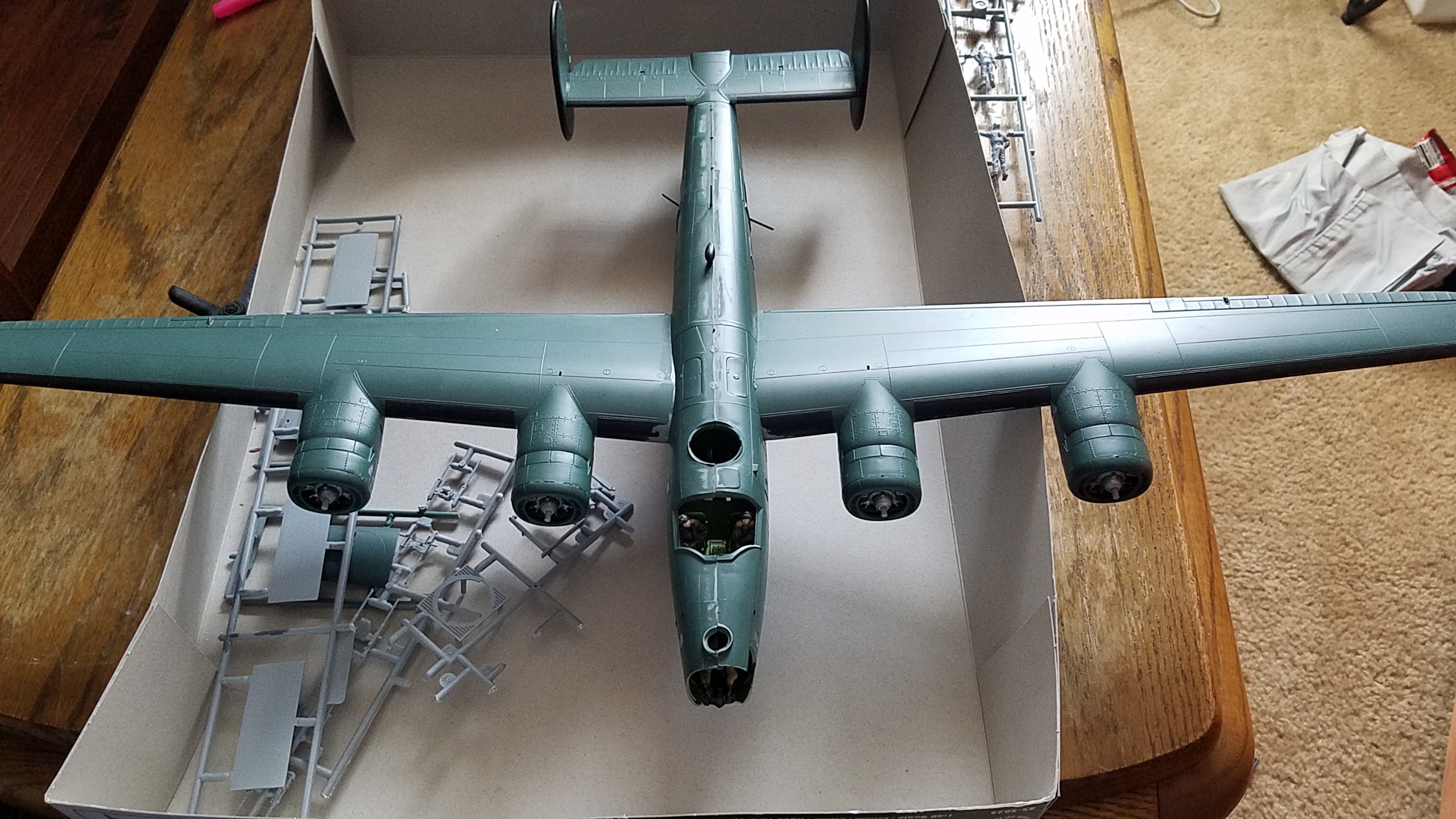 Another first for me was hand painting so many small pieces. Maybe I should have planned better and used the airbrush for painting pieces in batch, but I didn't realize that each piece needed painting until I was at the assembly stage. Here are the wing wheels and wheelwell. The tires, hub, strut, and wheelwell were all painted with a brush. Since the only paint I had in the needed colors were Airbrush thin, it took several coats; daunting and tedious when on a deadline. 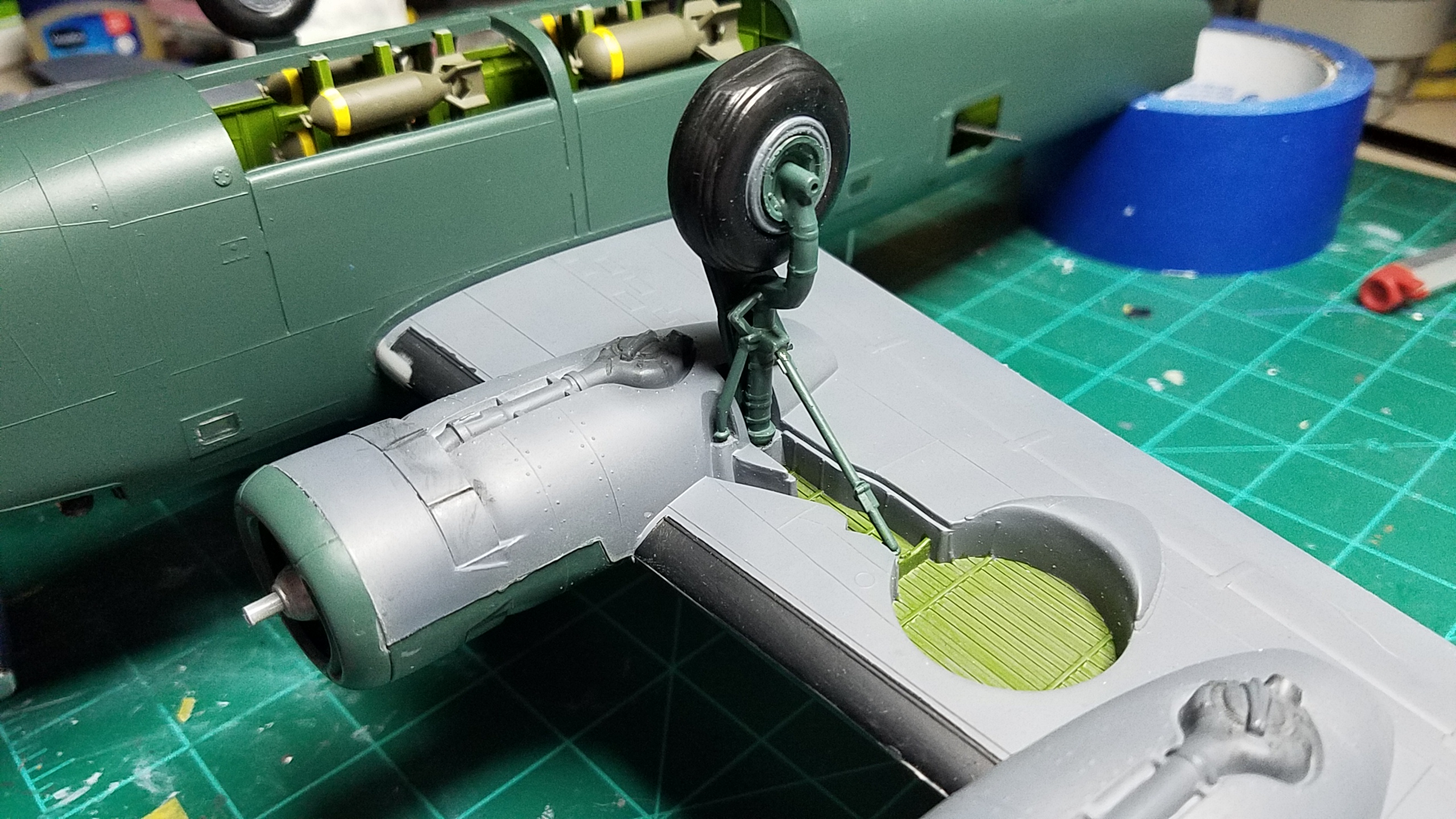 This one is to show both wings and wheel assemblies are attached. It hits me again about how big the wing span is on this "beast". 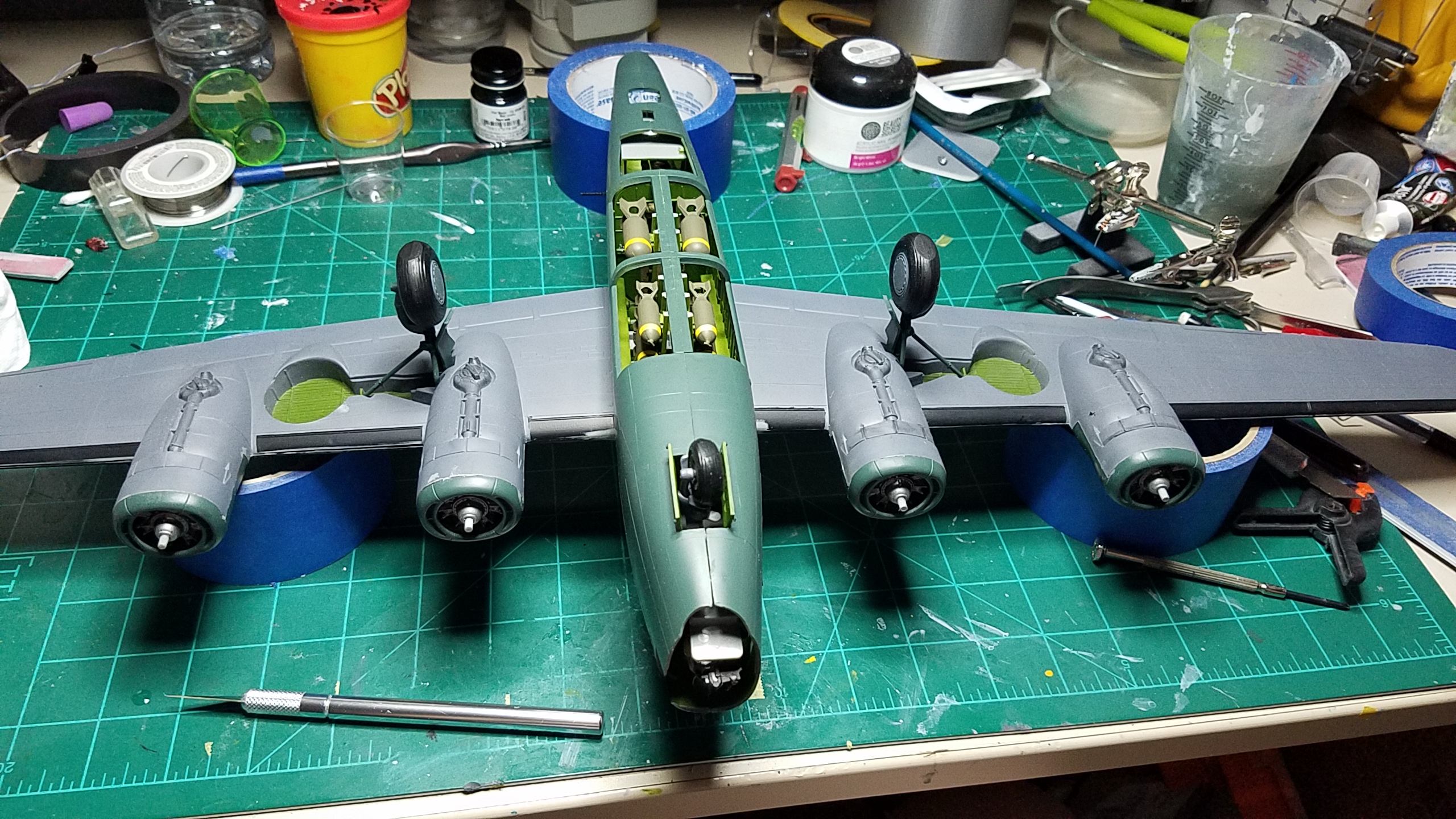 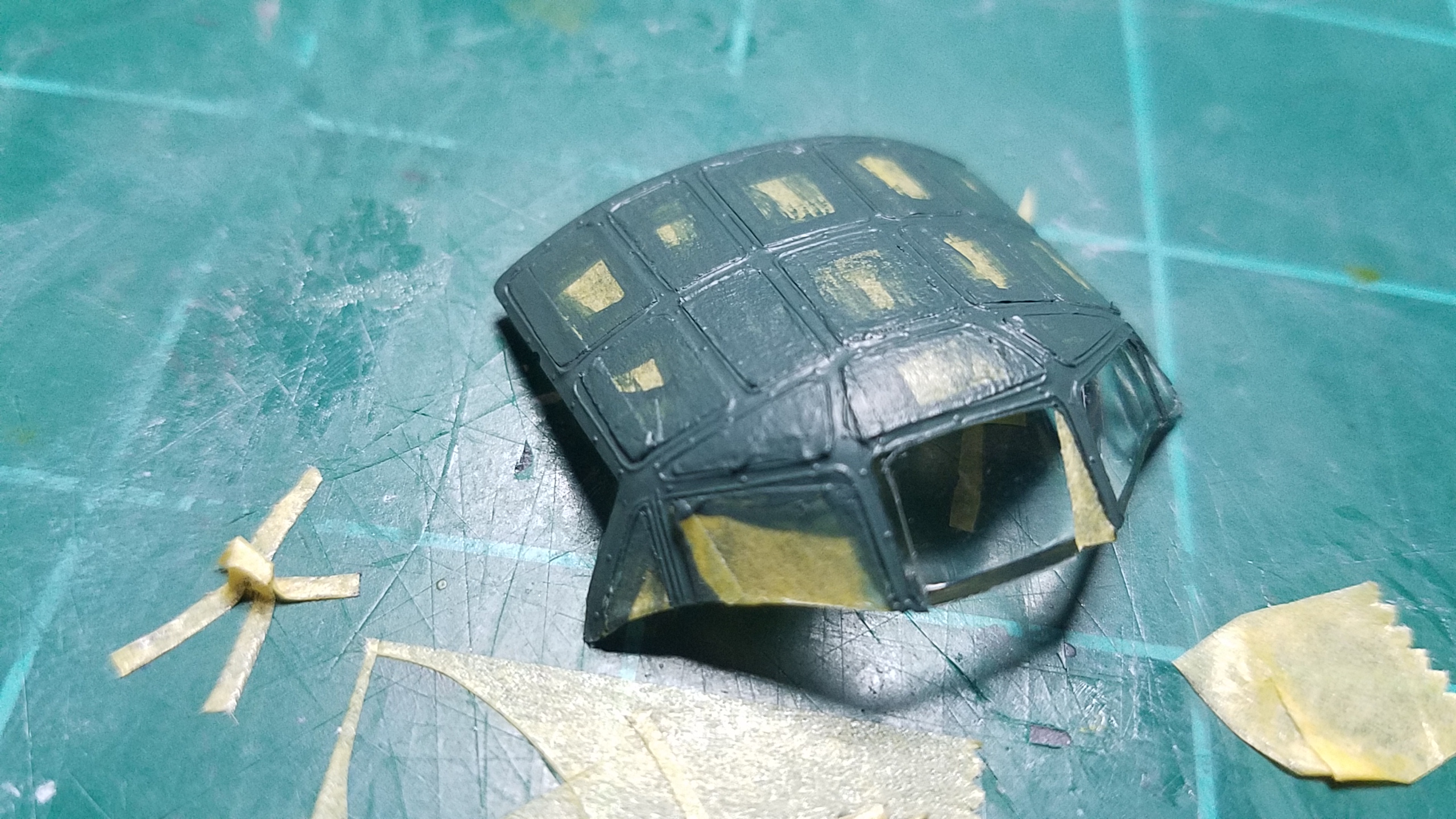 ...with acceptable results. After a bit of clean up with a Cleoid-Discoid tool, the canopy looked ready to install. 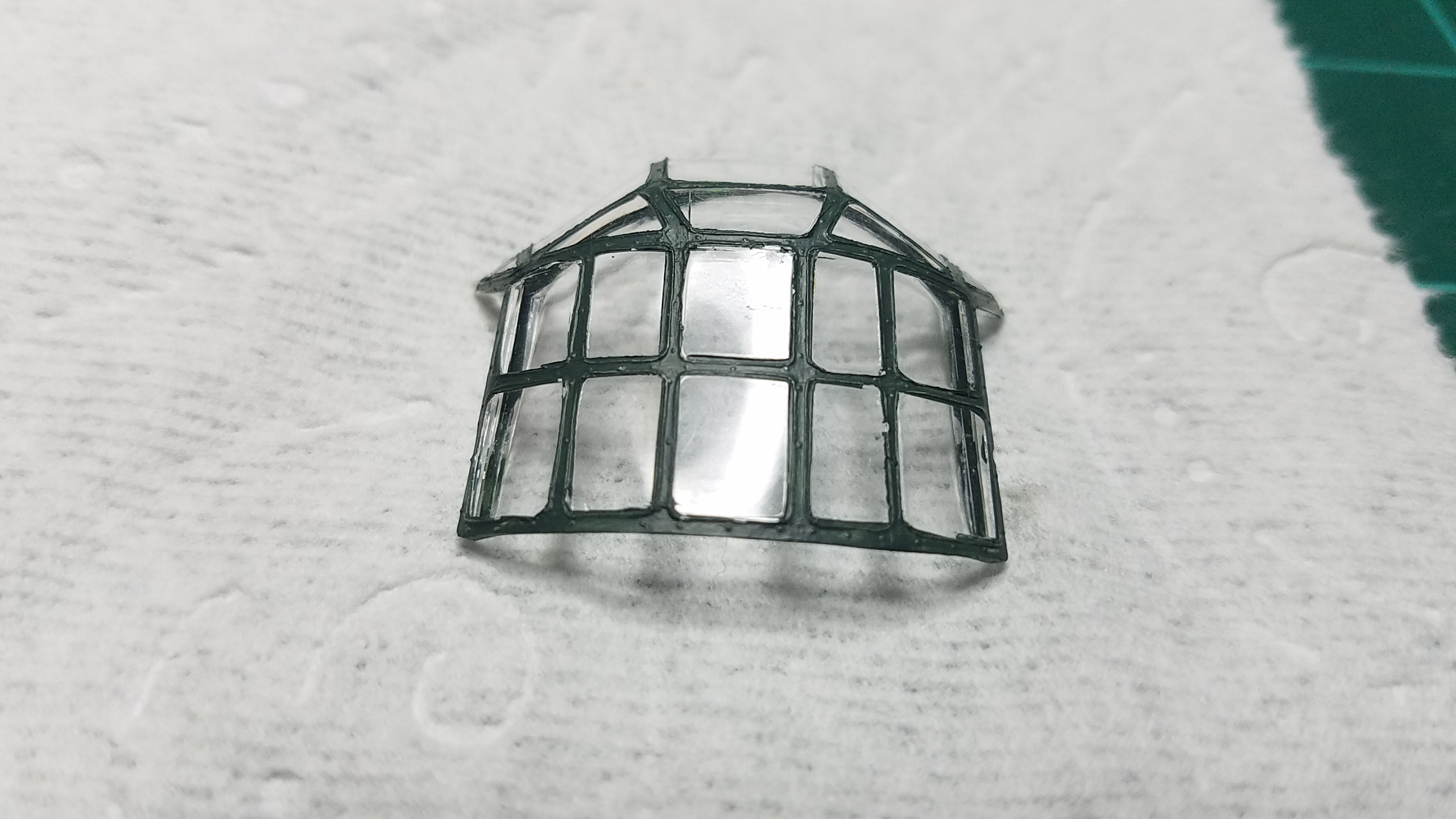 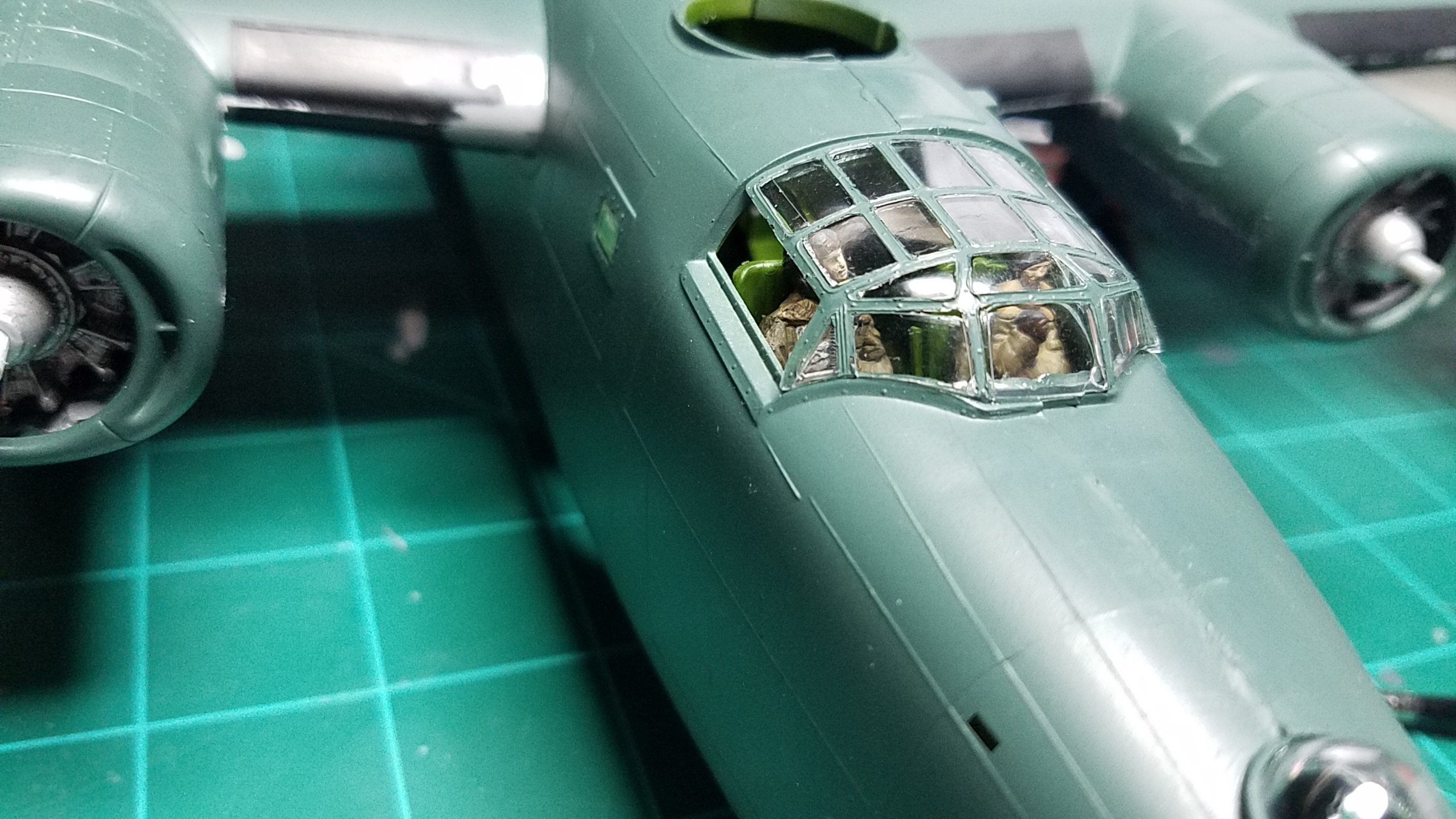 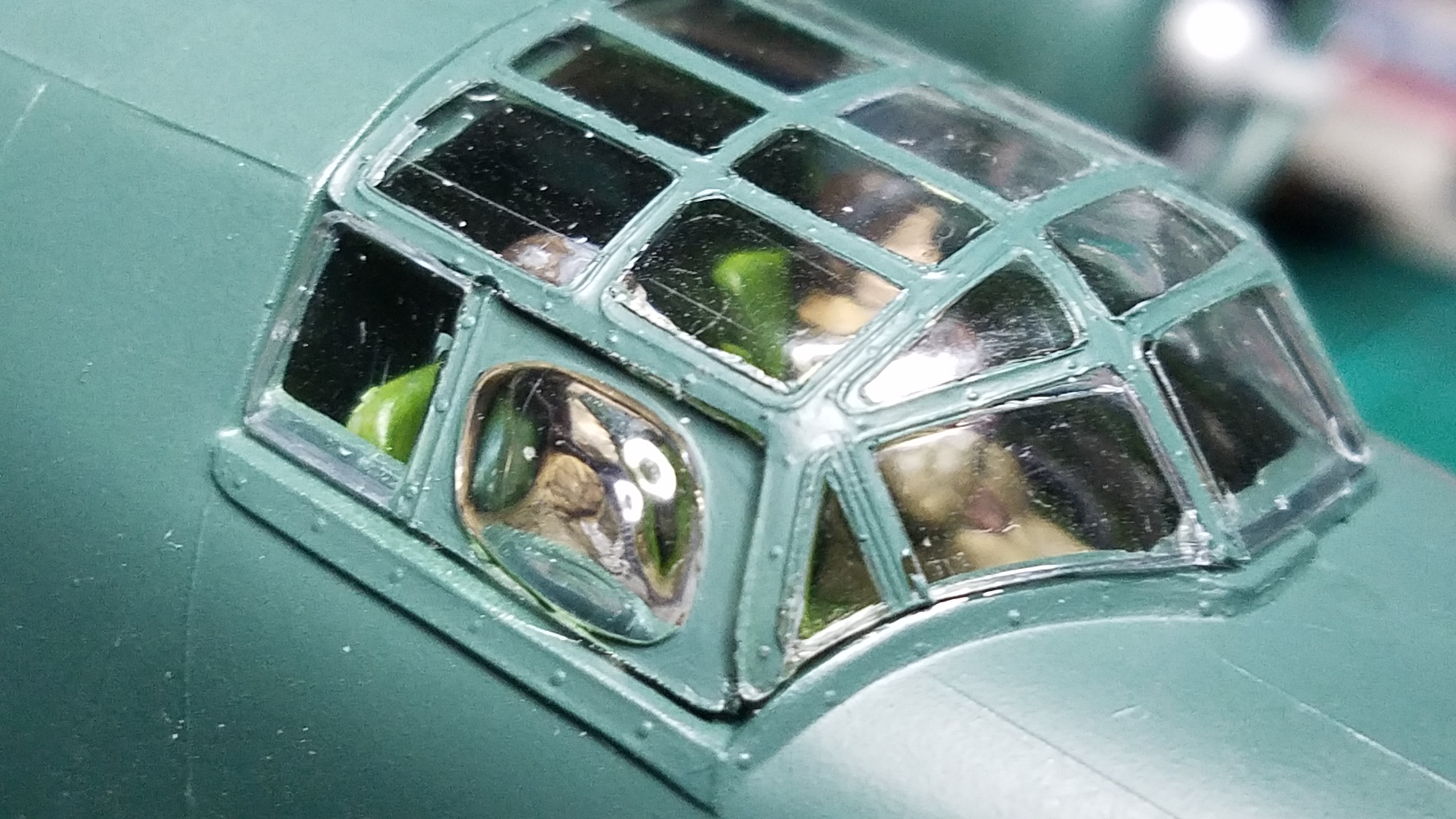 Here's a shot of the Nose Canopy Unmasked 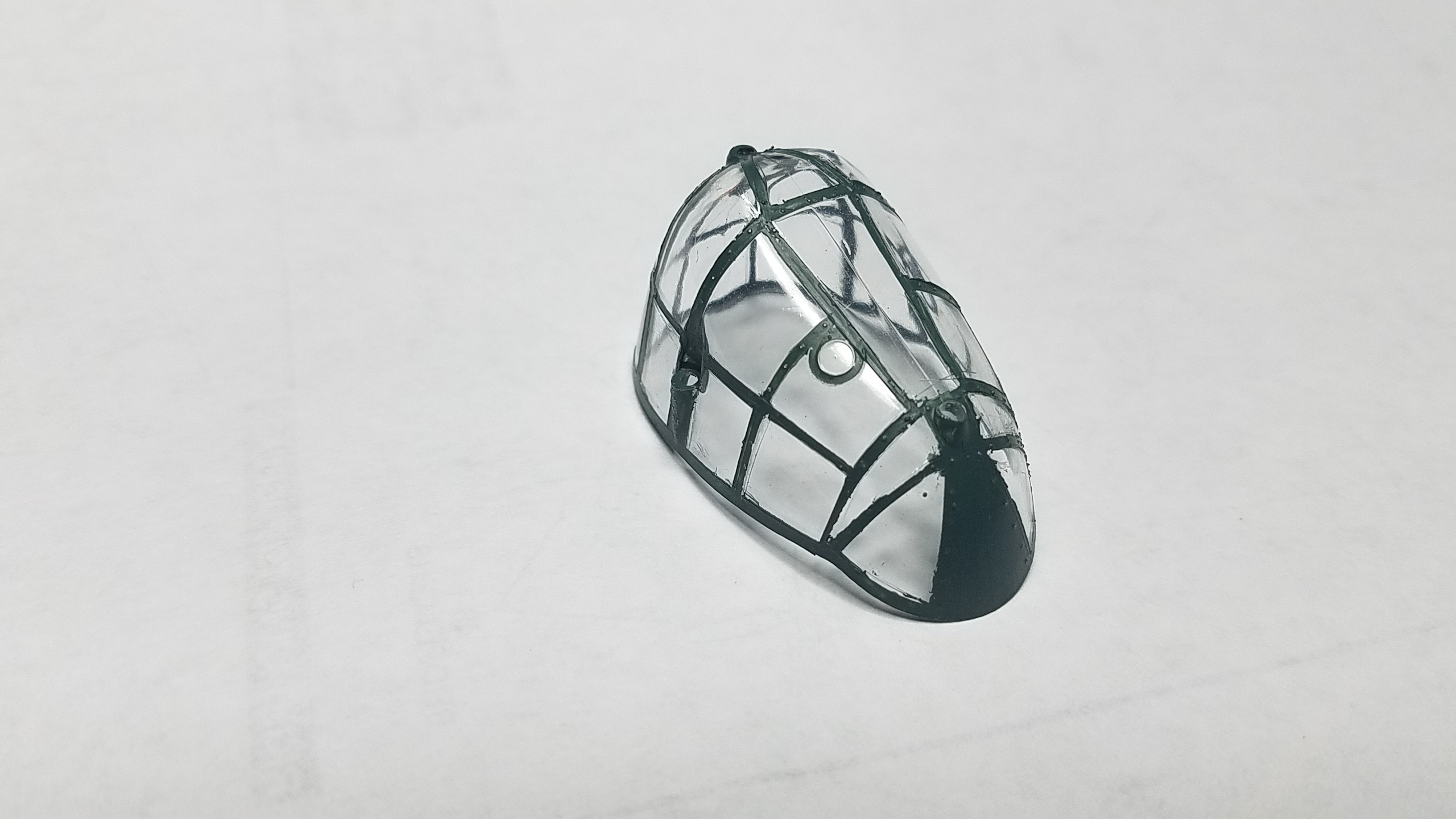 Tailgunner pod, cast in clear, took many coats of paint but came out pretty good! 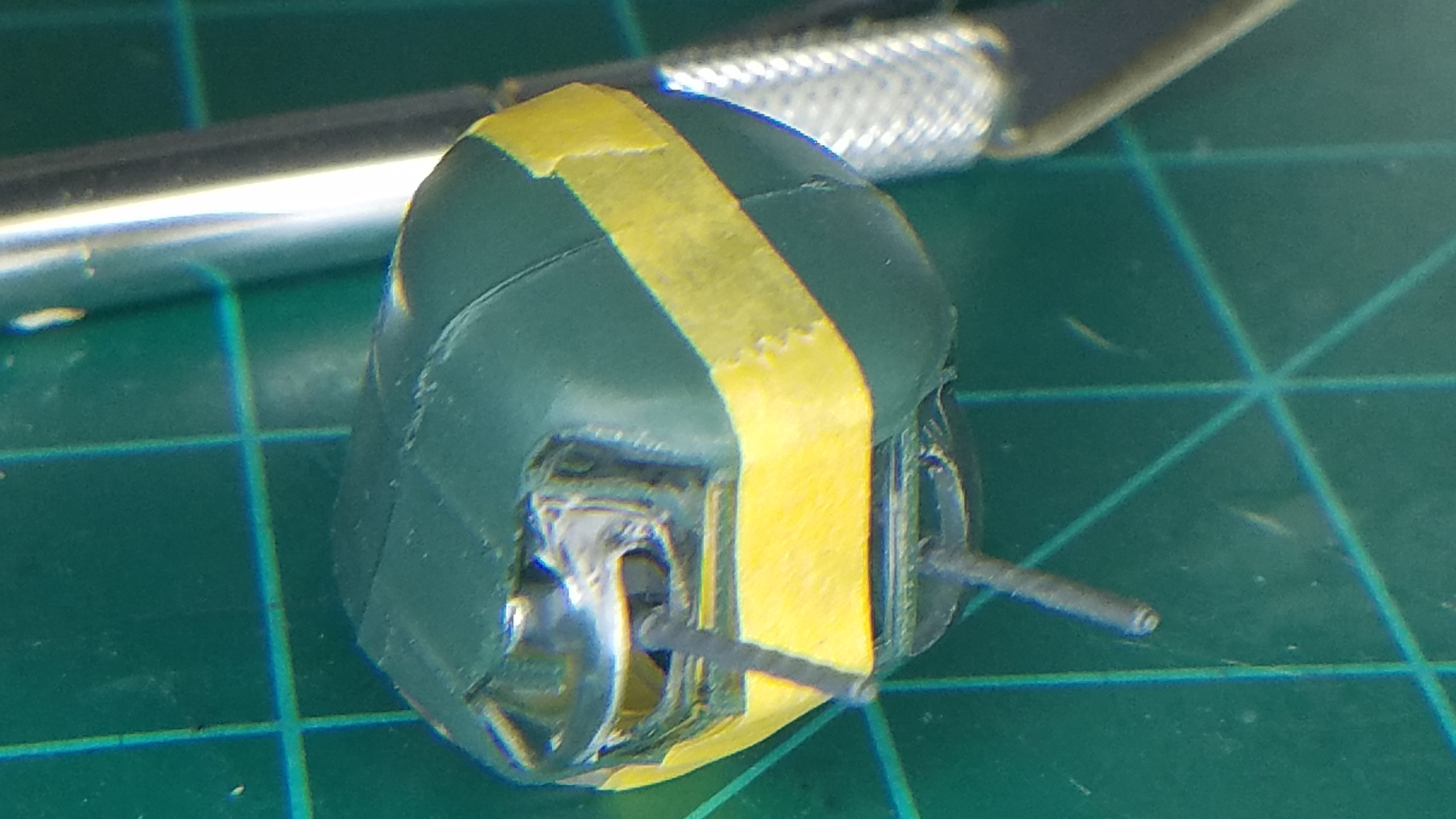 I had a bit of difficulty with placing the nose canopy. Since I put the Bombardier in place, looking through his bomb sites, I couldn't place the Port side gun without heavy modification of both the Port window and the gun itself. So, I opted to leave that one out. Not accurate but necessary. :/ 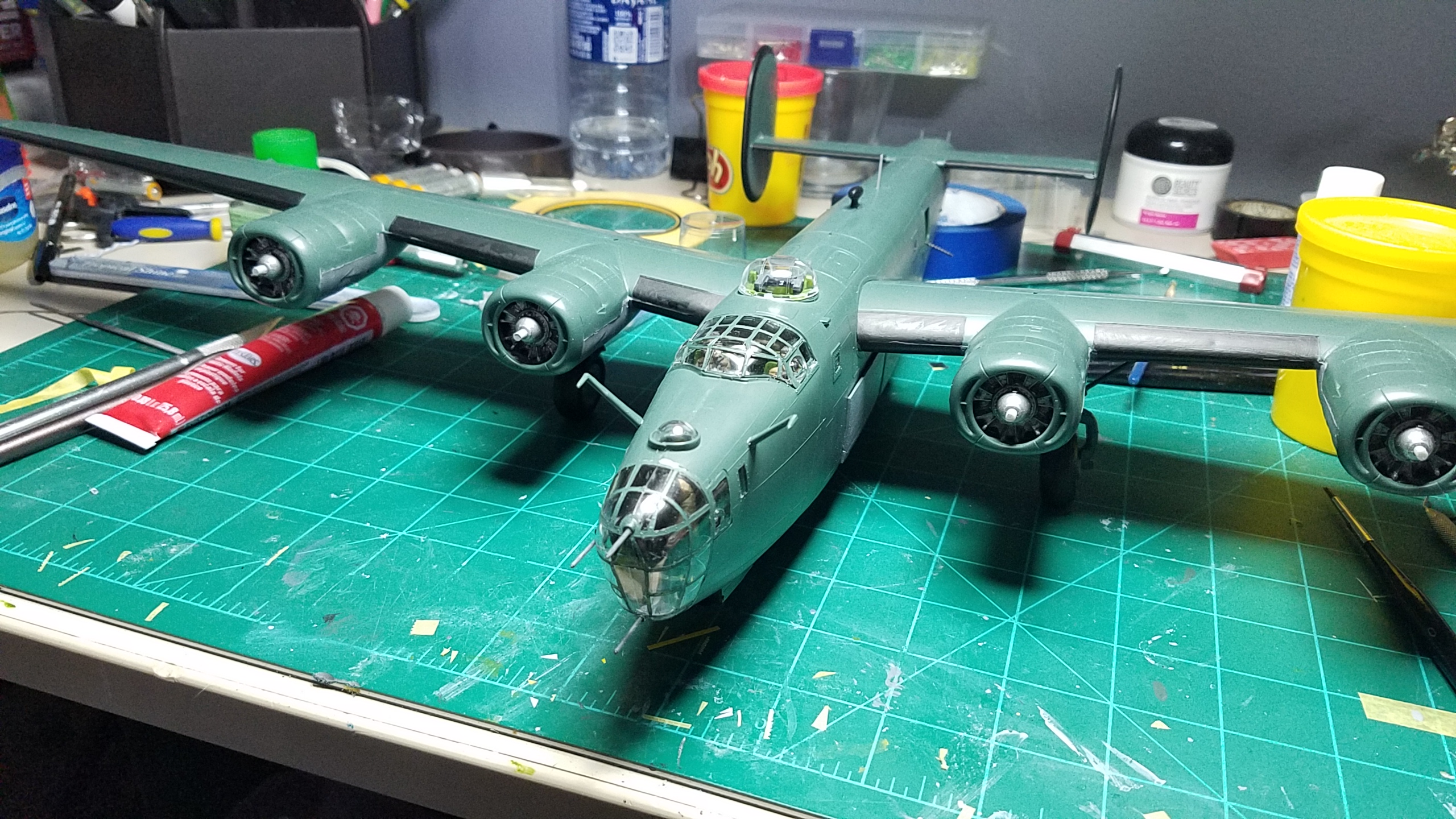 Per my standard approach, I applied a few layers or gloss coat. SHINY!! 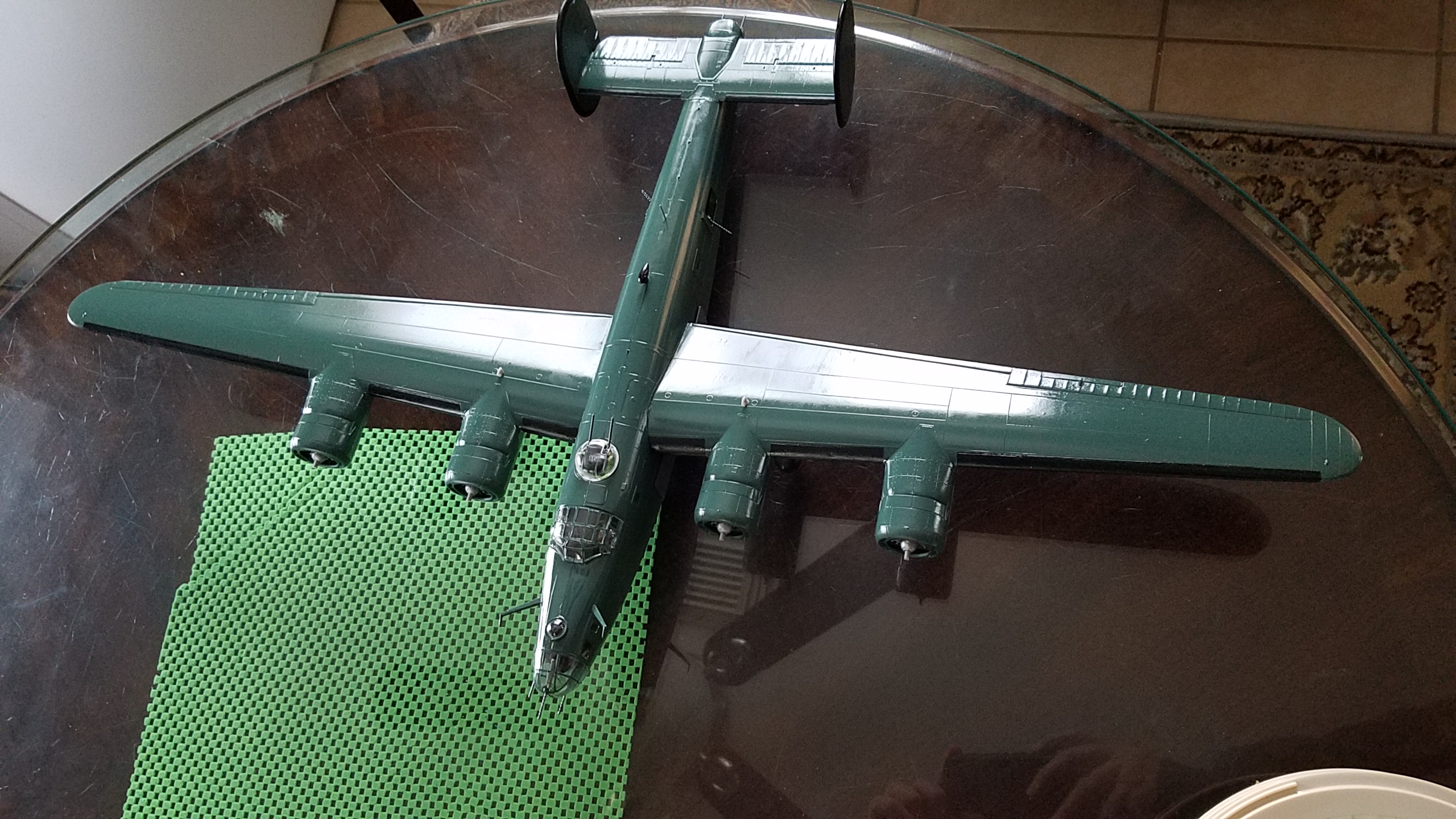 The model came with two decal and painting configurations. I decided to go with the Fighting Sam as the USAAF is closer and dearer to my heart than just the Army Air Corps. 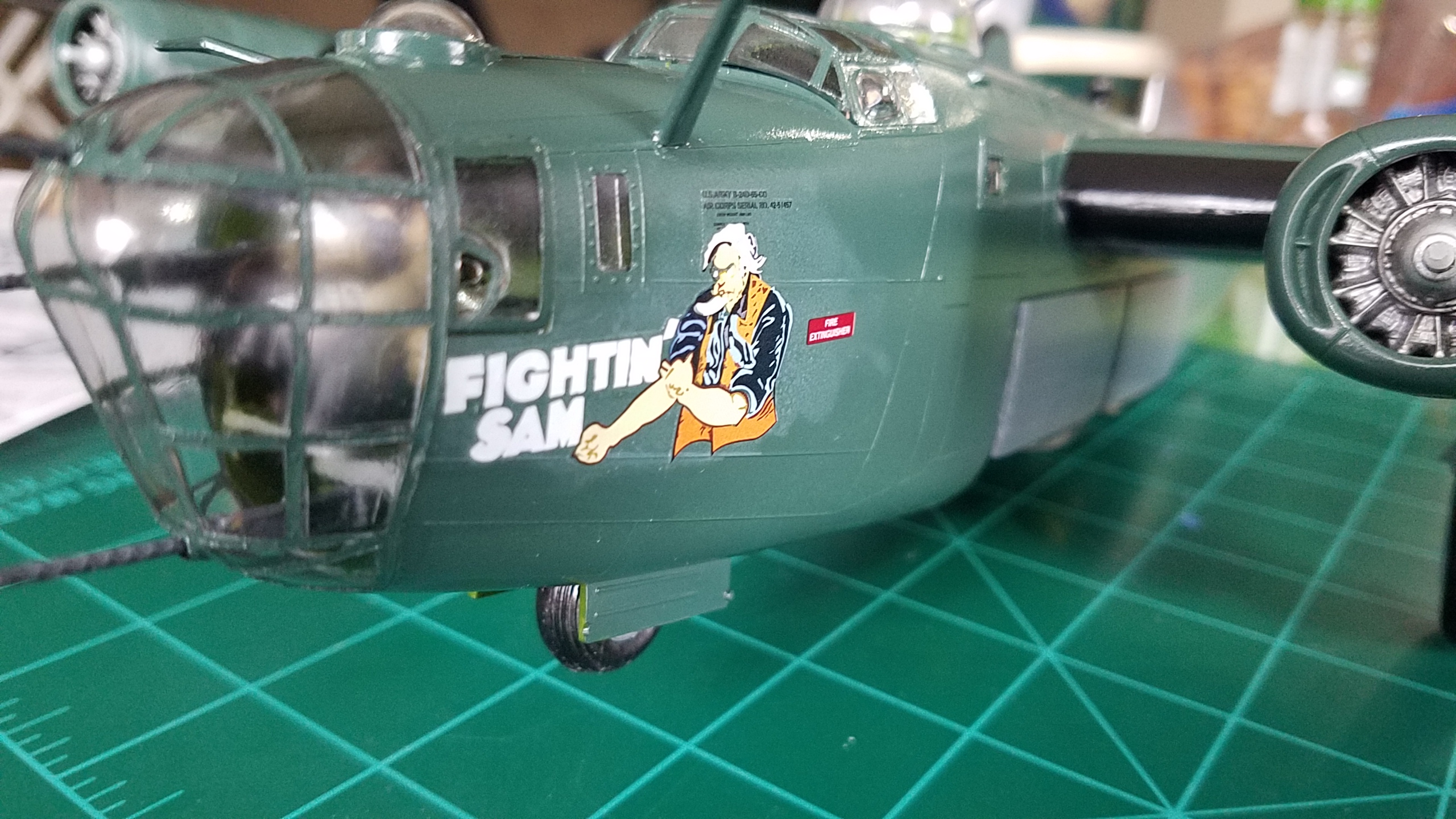 This is just to show the other decals. I had a bear of a time trying to get that blanket of a decal on the side of the fuselage. I used ever trick I knew to get that to sock up and lay down, but ended up with several folds in the decal. Had I more time, I probably would have stripped it off and airbrushed it on. Lesson learned for another build. :/ *sigh* I seem to have had a lot of those on this build. 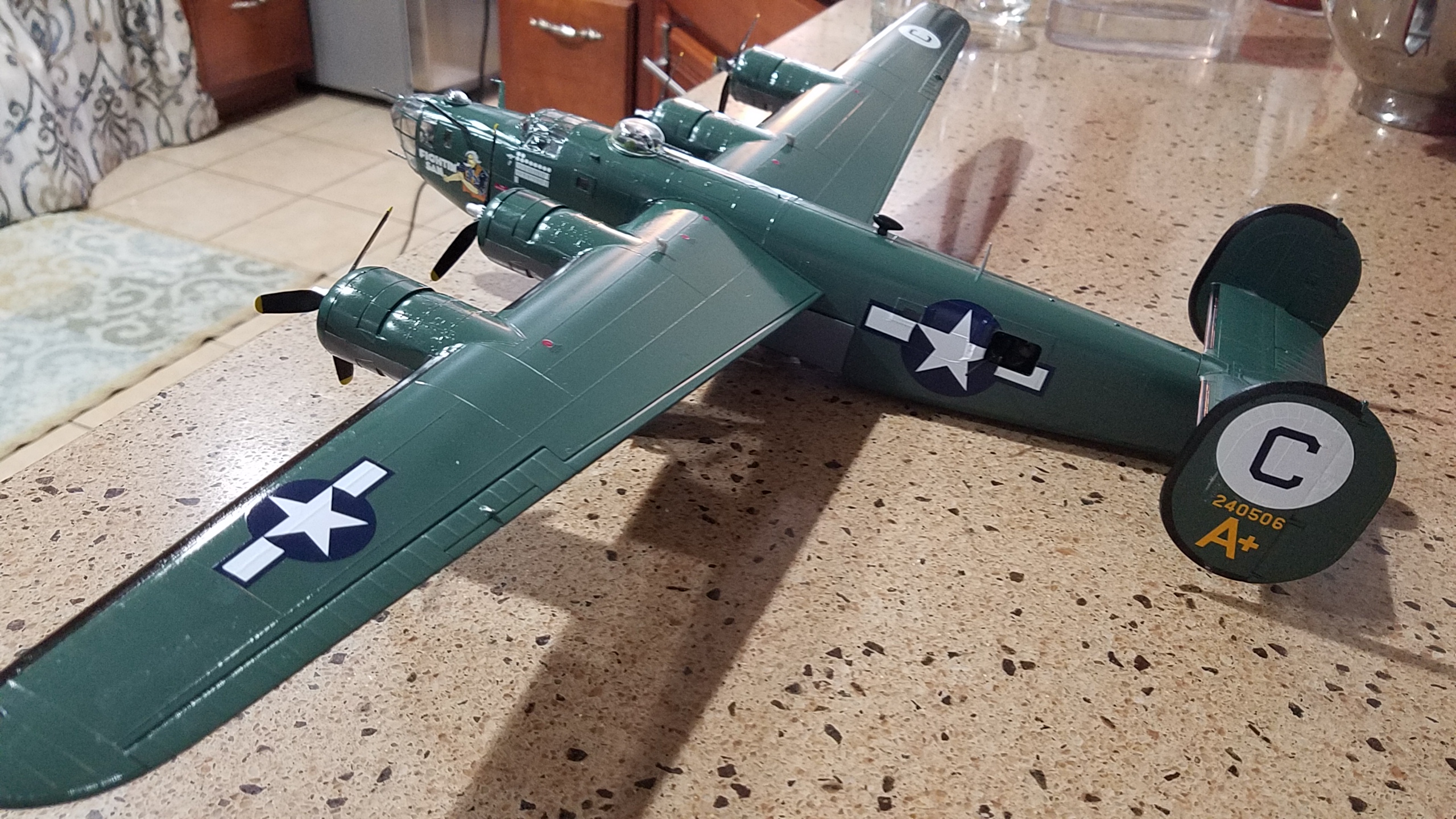 But, I made it to the end in time to pack it up and gift it to FNL. Here are a couple of shot of the Finished plane 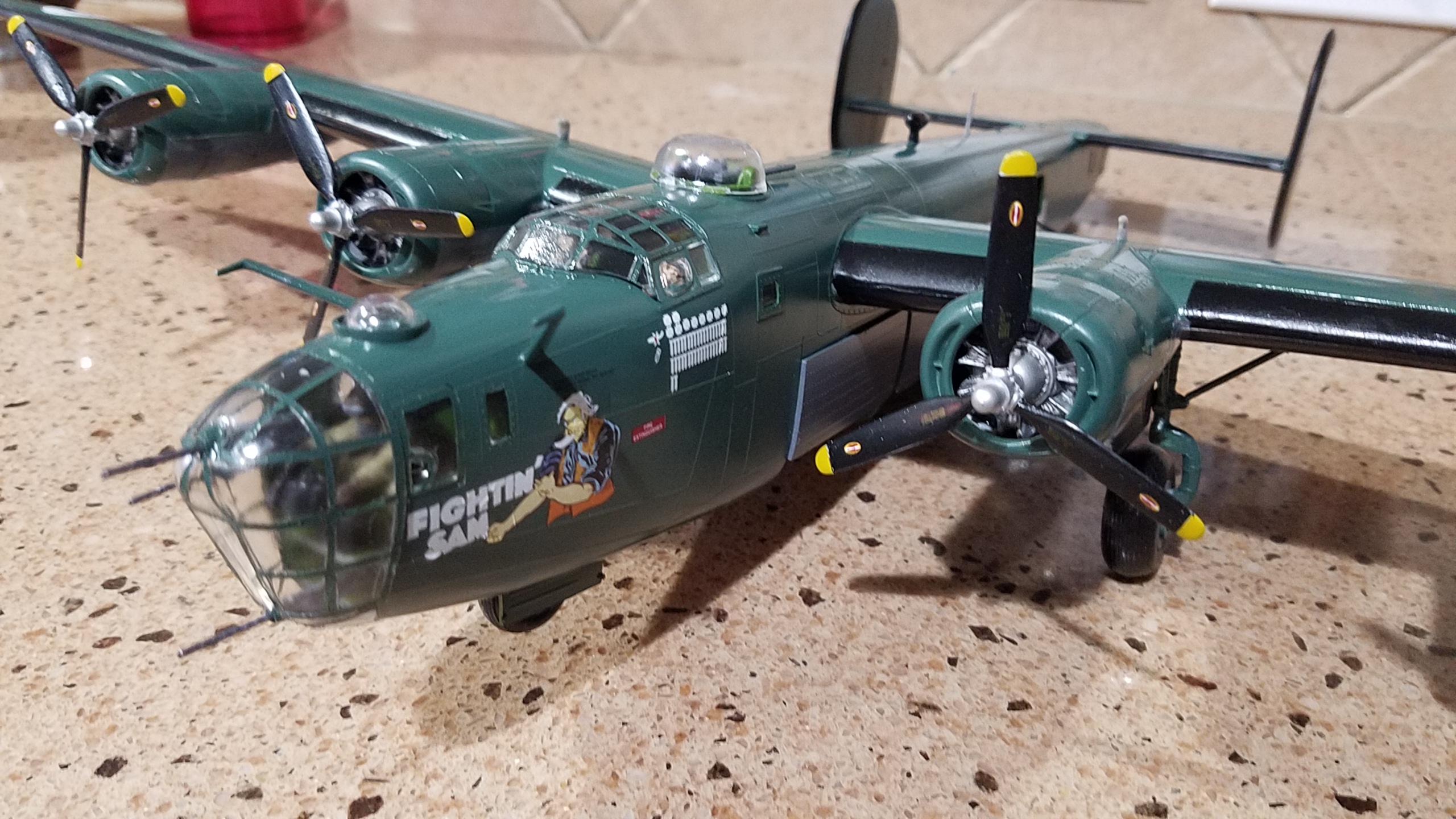 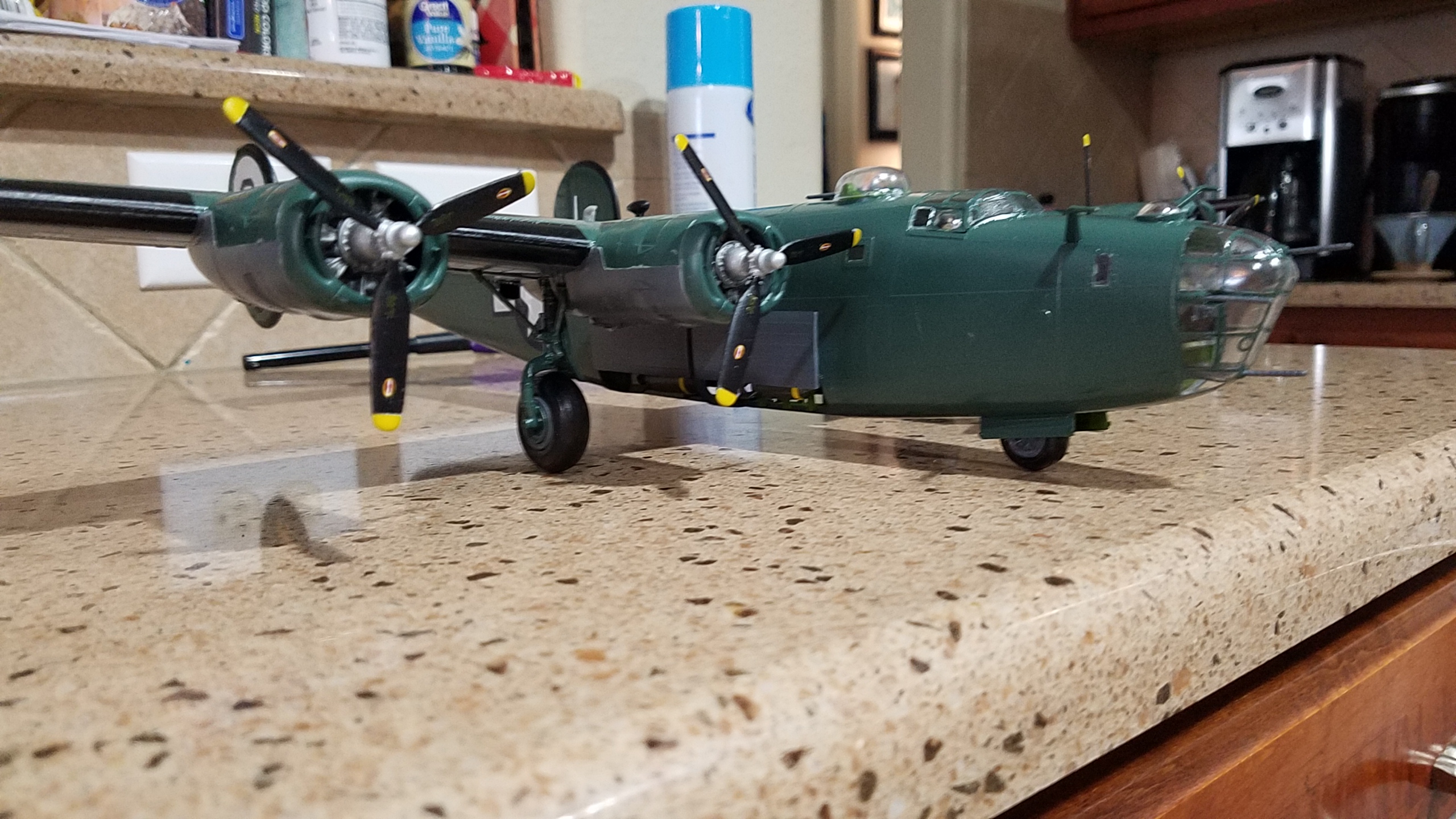 And a shot of the FNL when he got it! 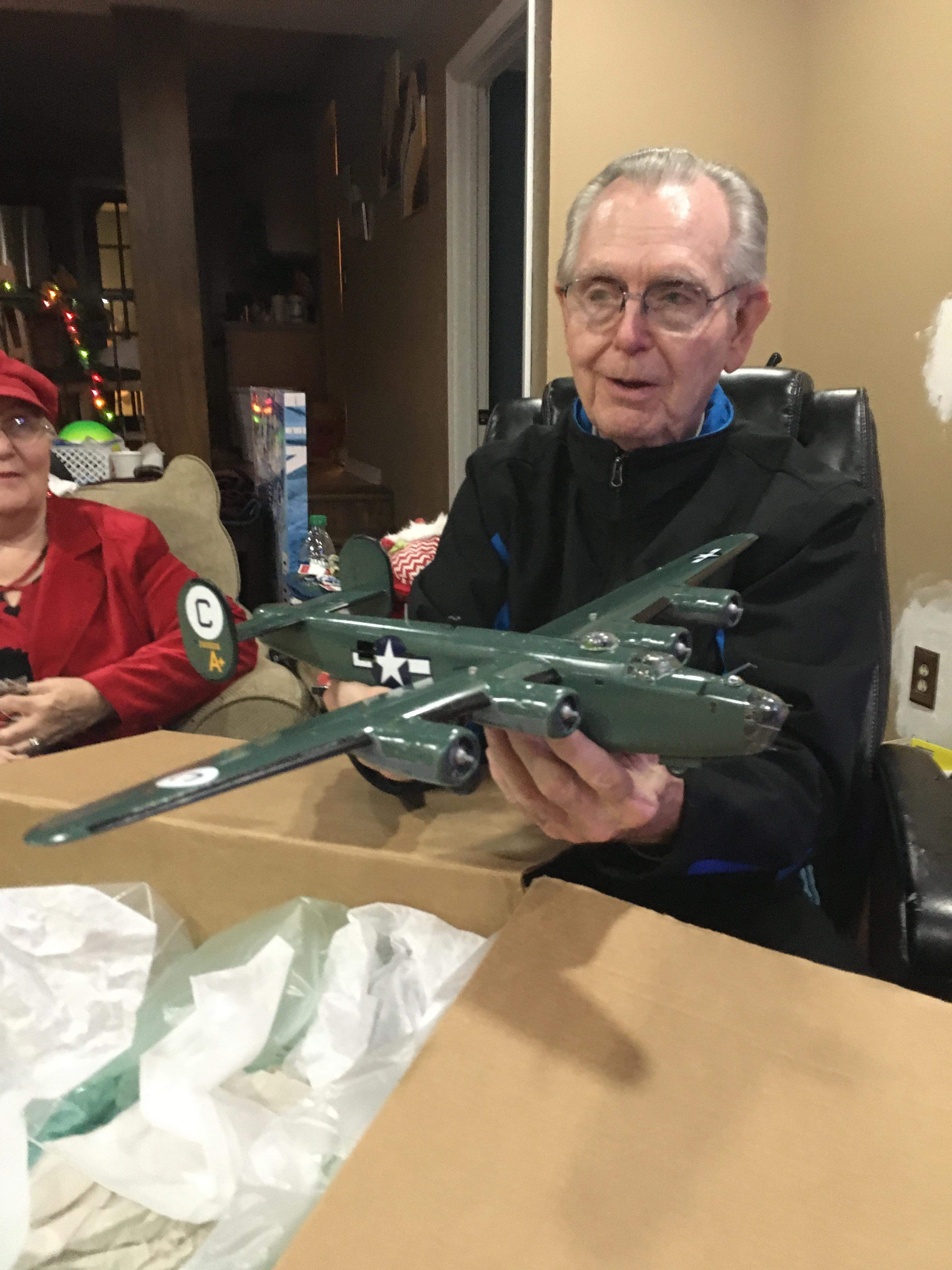 Thanks, again and as always, for reading, following along, and commenting on this build. May the Great Builder smile on your projects and may you never leave fingerprints on your model!

Steve
Admirals don't fly; do they...where's the fun in that?!
Top

I bet he was proud to receive it.

Just went back through and re-read the build thread and it's fine work. I'd definitely be proud to have it.

Planes, tanks etc. aren't my really my forte either, but for something this big, I'd probably make an exception. And you're right, it all usually translates well from one genre to another.

What a fine result and what a great gift!
"When I left you I was but a learner; now I am the master."
Top

Thanks Shawn, he was really happy and, now, its all he talks to me about - that and when will I build him another plane?!

Just went back through and re-read the build thread and it's fine work. I'd definitely be proud to have it.

Planes, tanks etc. aren't my really my forte either, but for something this big, I'd probably make an exception. And you're right, it all usually translates well from one genre to another.

Thanks Spencer! It was fun and I didn't even have to figure out how to light it!

Thanks Scott! While I started and finished it as a gift, it was tough not to have it in my collection.

Thanks Dirk! It really was a stretch for me as, like Spencer said, "Planes, tanks etc. aren't my really my forte..."

Thanks for the wonderful comments!