Forum rules
Forum Rules For All Members: No posts of any kind containing offensive language or personal insults will be allowed. Also, no pictures depicting full nudity whether in a post or an individual members personal avatar are permitted. Spamming or multiple trolling posts by members in an offensive way are also not permitted. Violations of these basic guidelines will result in Admin taking action starting with a warning and up to a permanent ban from the community for repeat offending members.
Post Reply
28 posts

I got the big girl finished up last night and all that is left to do is work on her final base at the weekend. The sound system is being put together as we speak and I should get it early next week.

After so many kits crashing and burning recently I really had lost my will to live regarding model kits but this one was a lot of fun to put together. So much so I keep badgering the maker to get on with the retooled version so I can get another one. Been looking at smaller versions and toying with getting one which although smaller still comes in at 20 inches (from Dan's Dinosaurs I believe).

Before I waffle on too much here's the pics I took once the dullcote had dried. I thought I had screwed up with the wash used to bring out all the folds and creases in her skin but it came out pretty good I reckon. 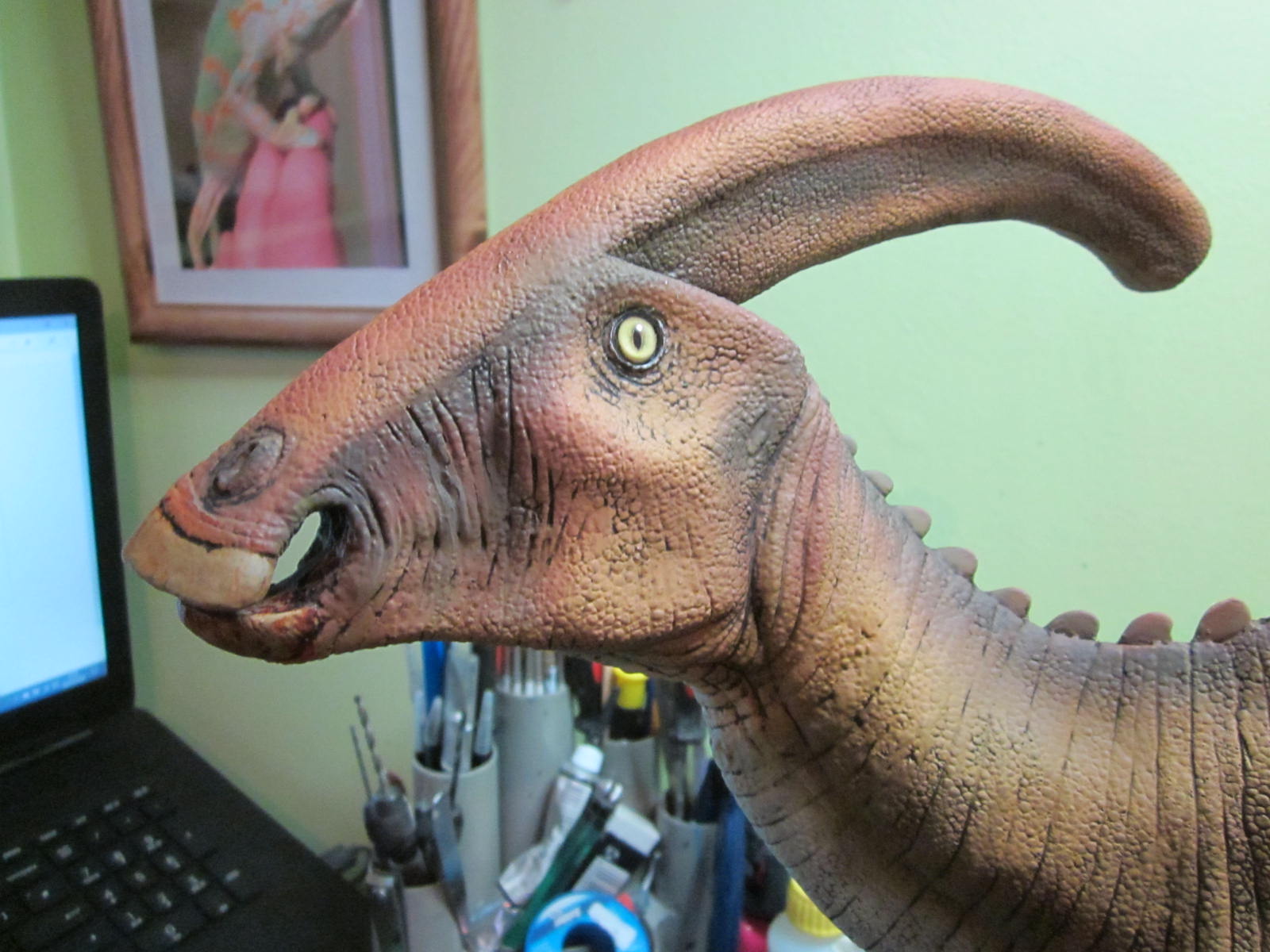 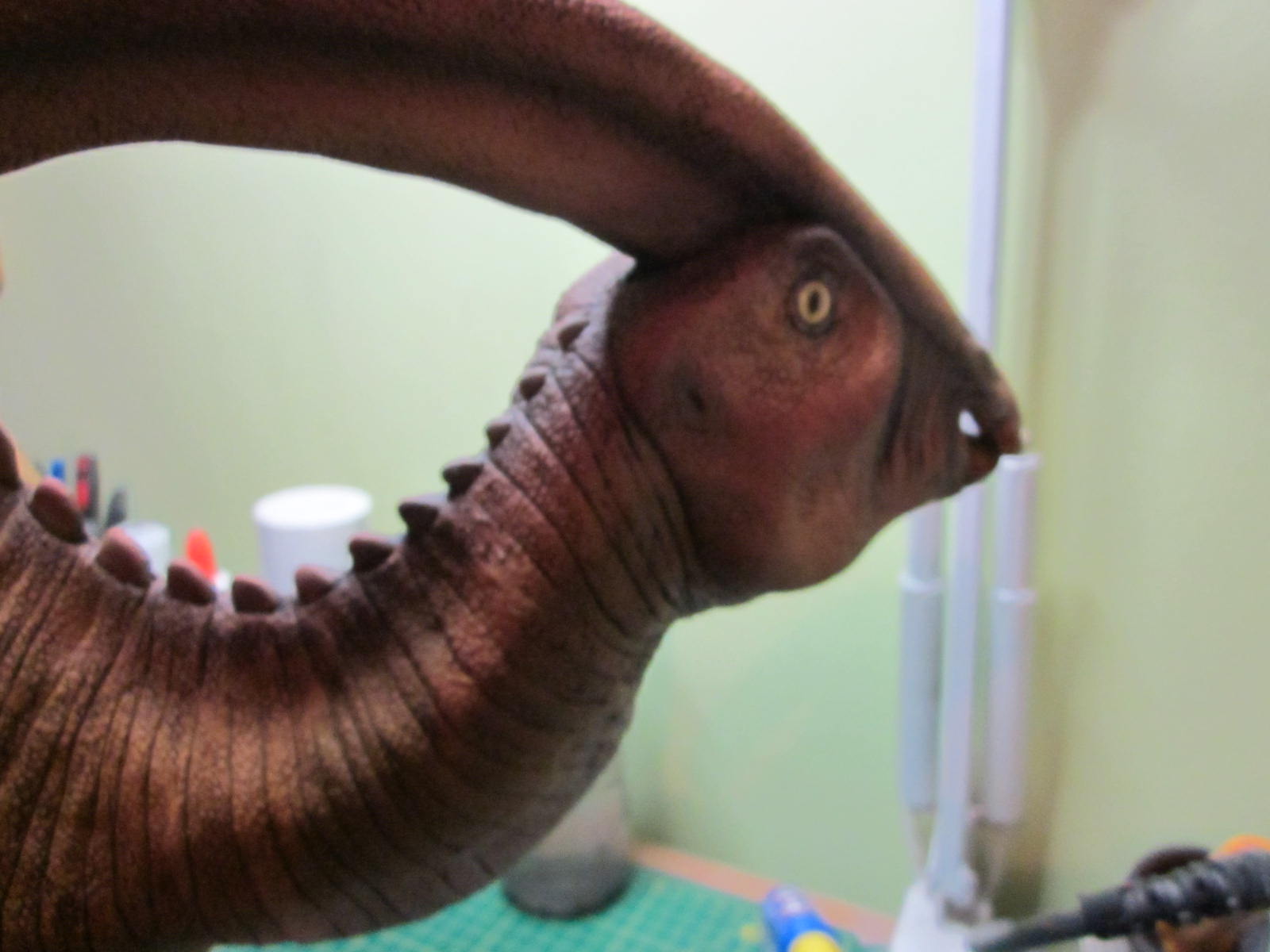 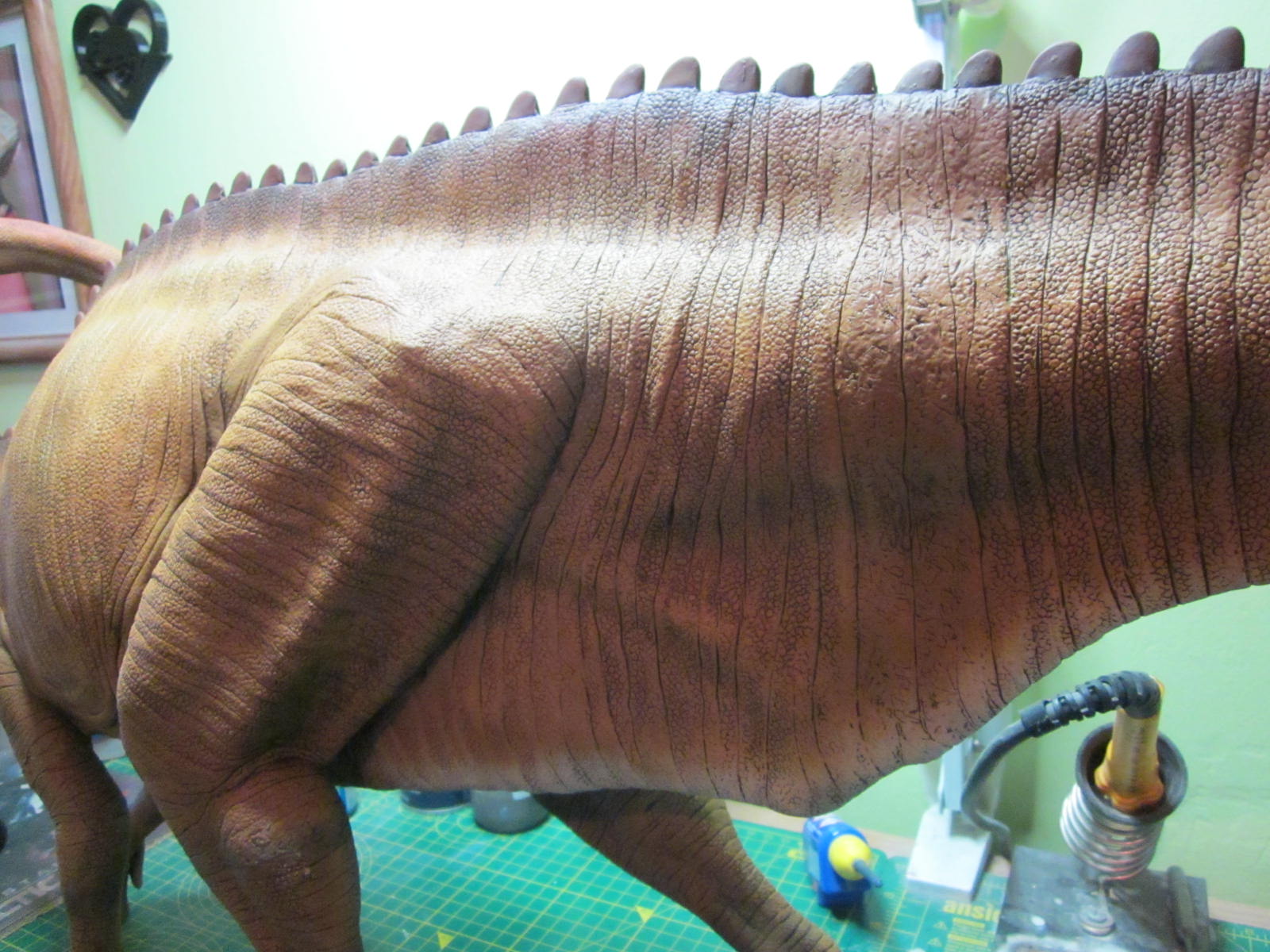 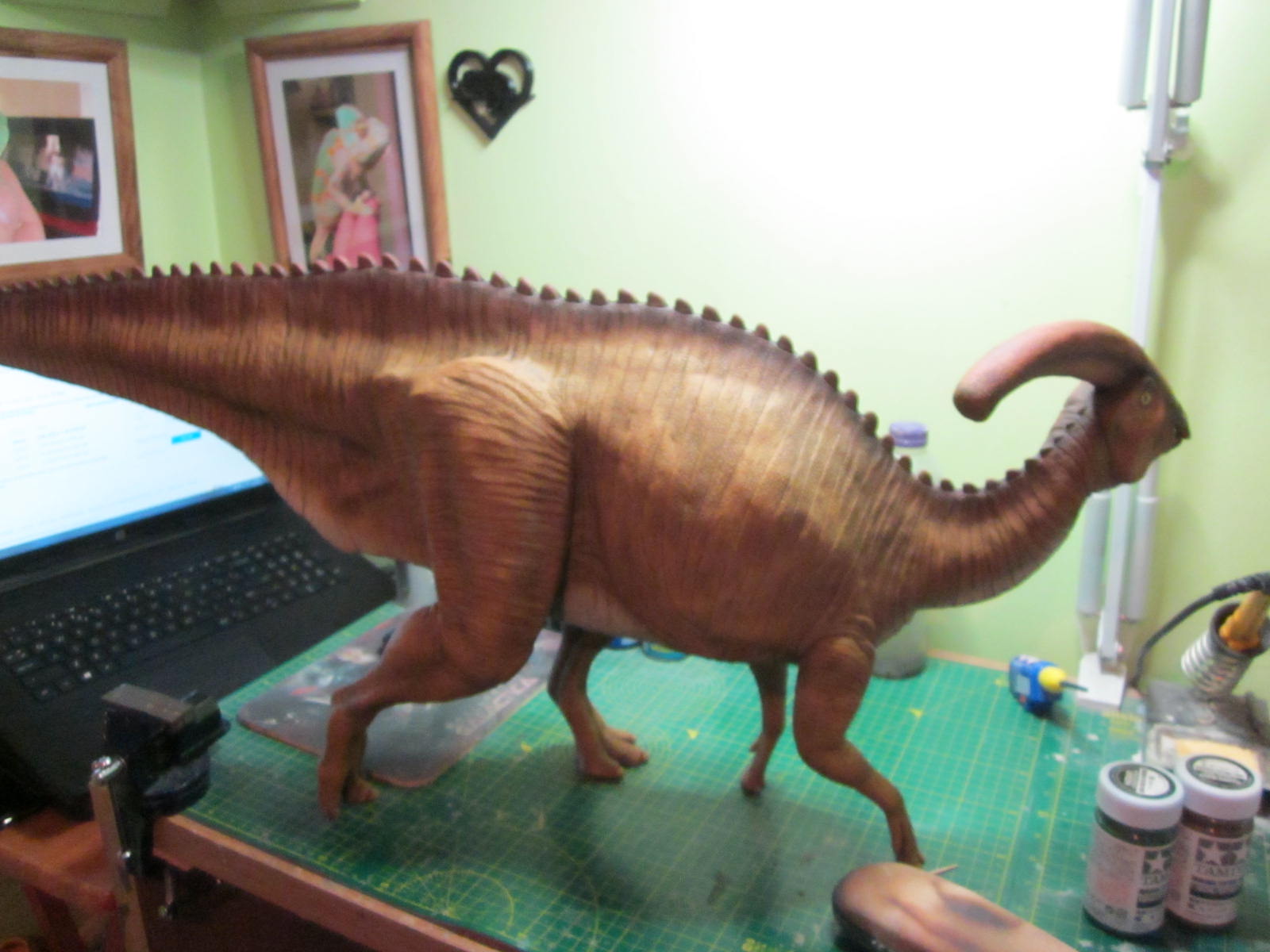 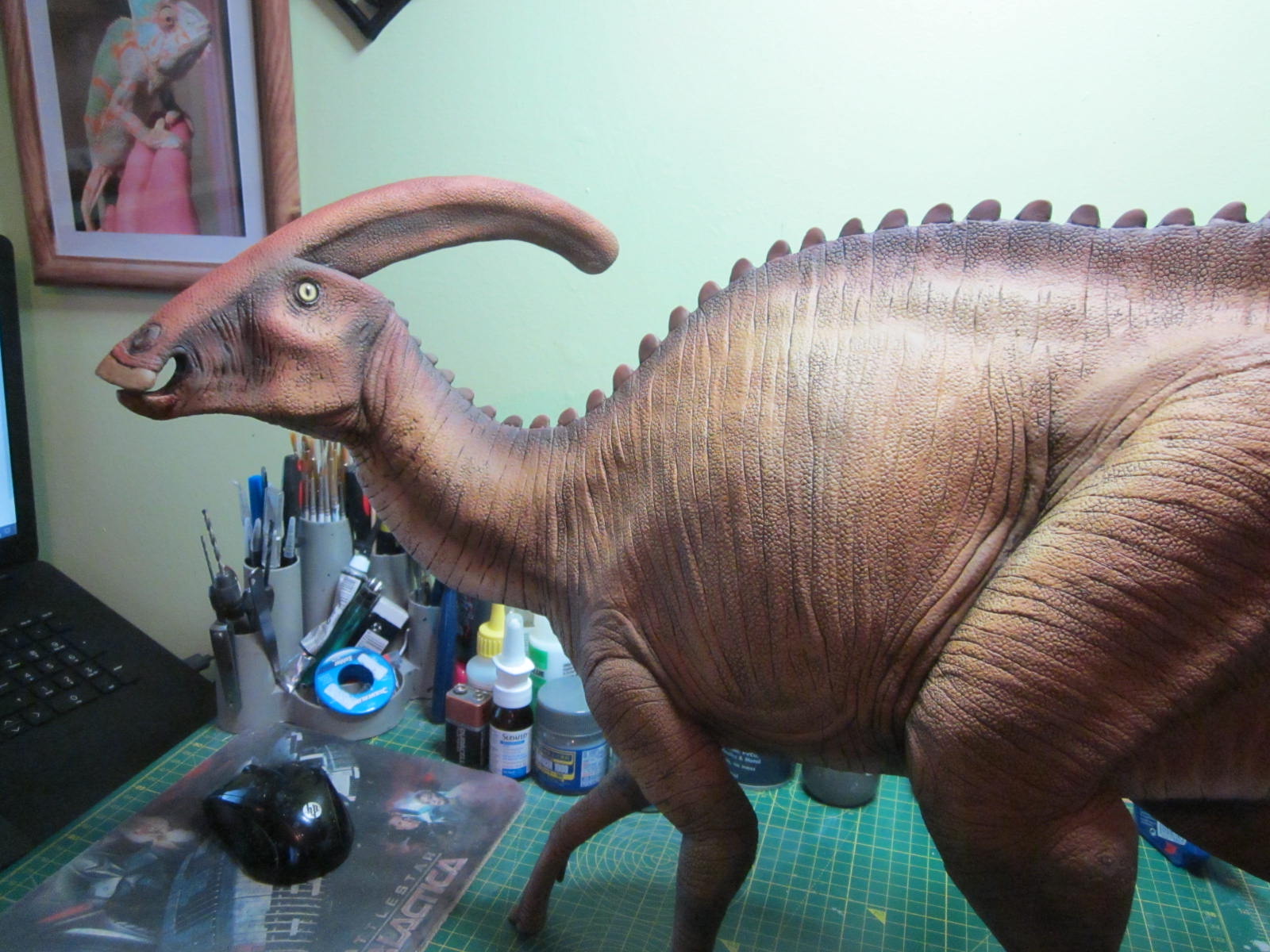 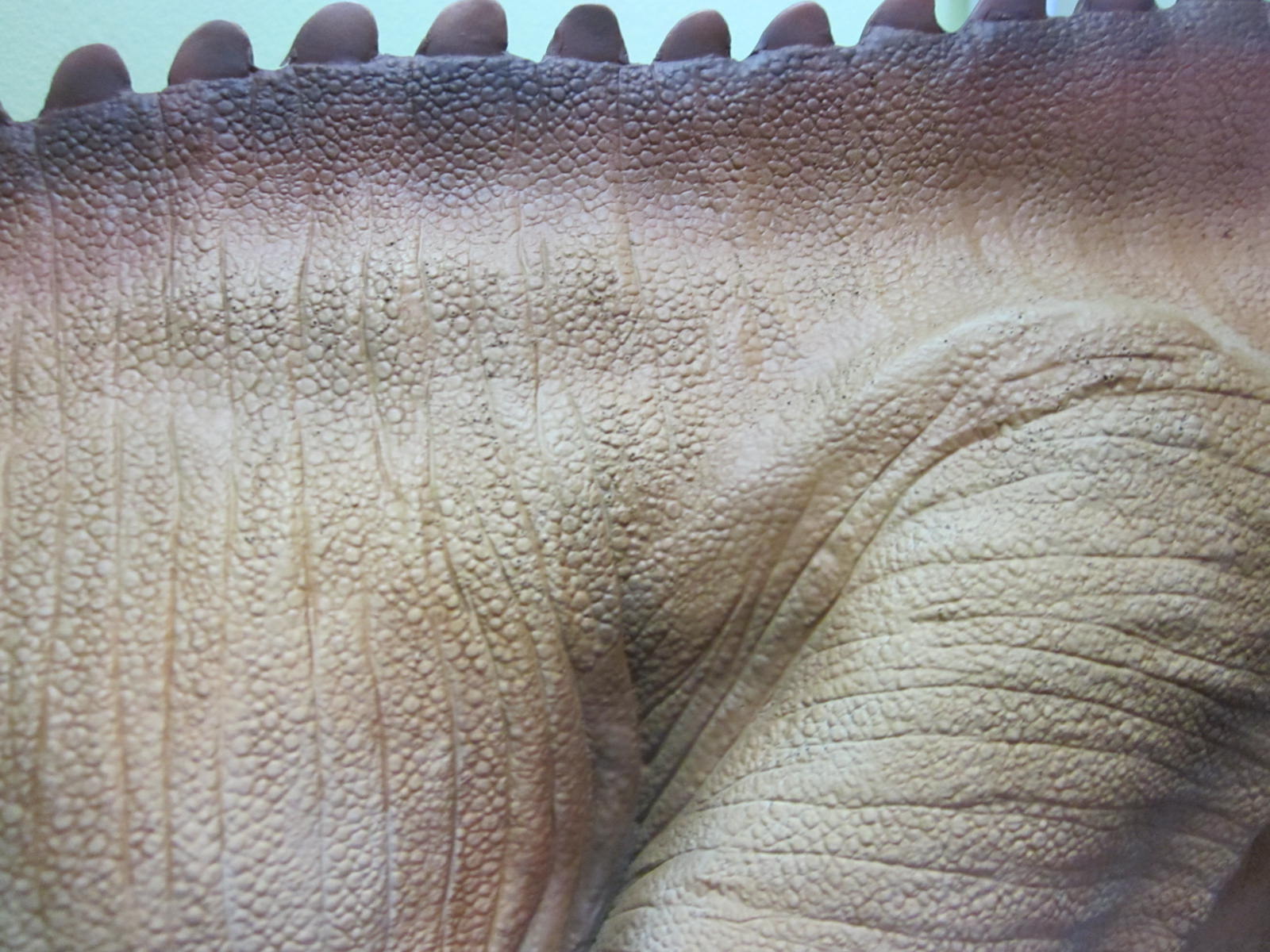 Next time you see her she'll be on her final display base.
Iain

And my big girl is finished so say hello to Dina.

She is a 1/10 scale Parasaurolophus by Masterpiece Models. She is actually the second one I have had as the first one lost in a battle between our cat and two Yorkie pups. It is also a unique kit as it was specially made for me by MW as they planned on releasing a retooled version somewhere down the line but apparently interest for this type of kit is on the wane which is a real pity but if the mk.II version ever sees the light of day I am at the top of the waiting list for at least one.

She's a resin kit and at a little over 38" in length she is even bigger than the 2018 SSD I built. Painted mostly with Vallejo Air paints apart from her eyes which are taxidermist cats eyes and she really follows you around the room like some old painting. The base is kitted out with Tamiya Texture Paints brown earth and green grass with some inscale dried grass here and there.

The part of this build that I am most proud of is her "voice" which is quite eerie when you hear it. It is apparently the sounds this animal could have made after a almost perfectly preserved skull was unearthed with all the intricate air passages intact. It must have been an incredible sight to have a whole herd talking to each other,

Enough of me waffling so here's some pictures of my girl, 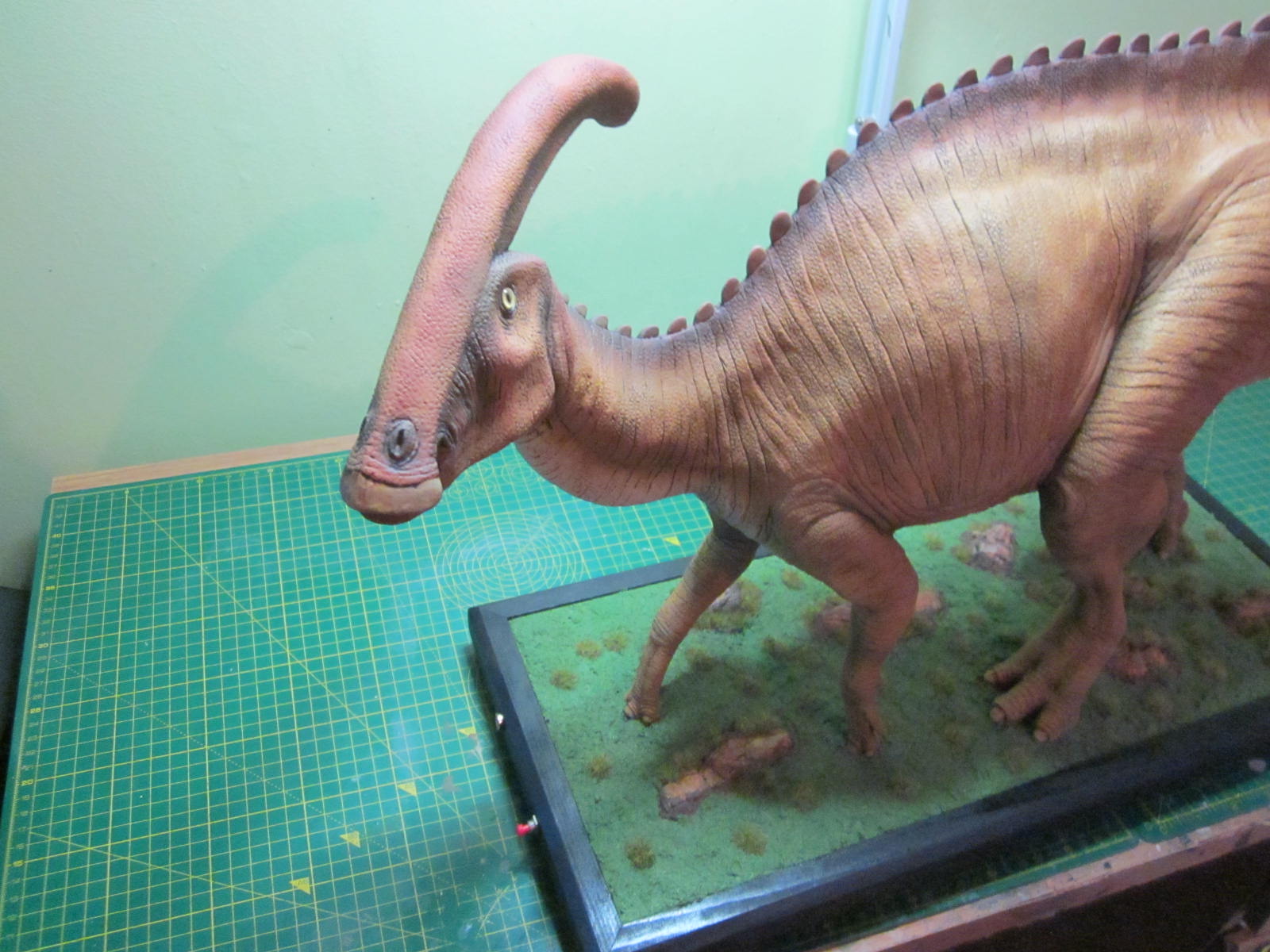 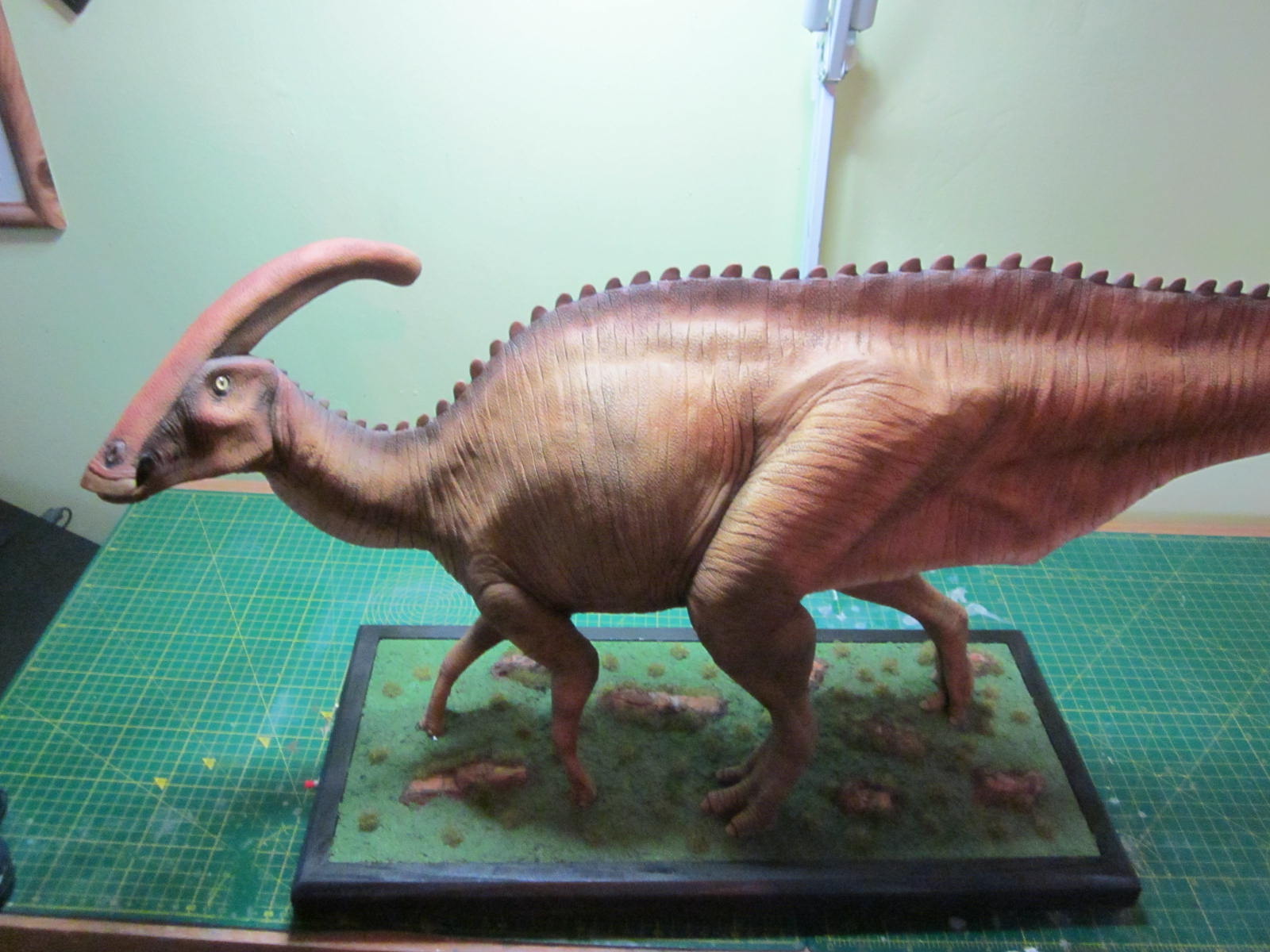 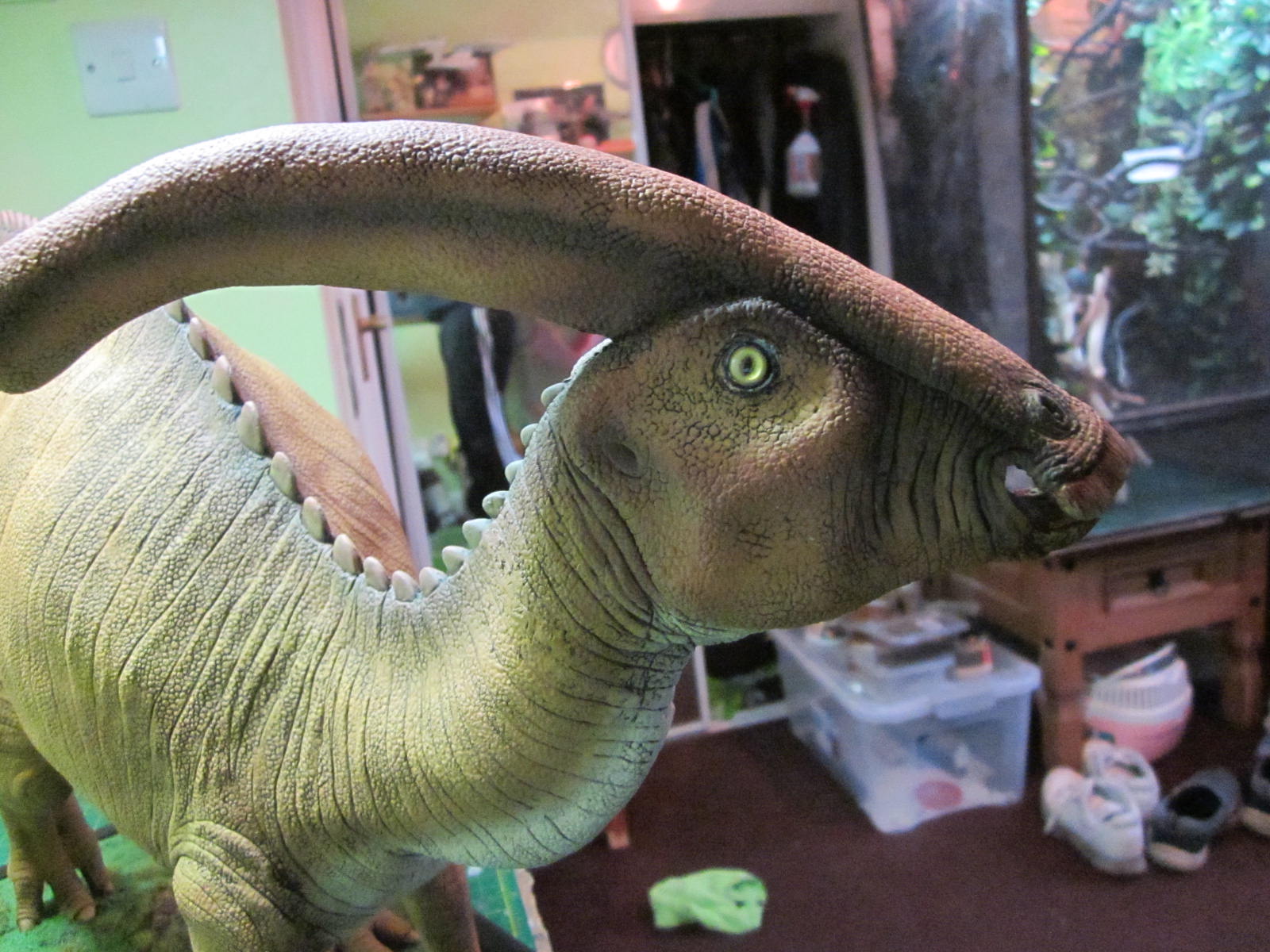 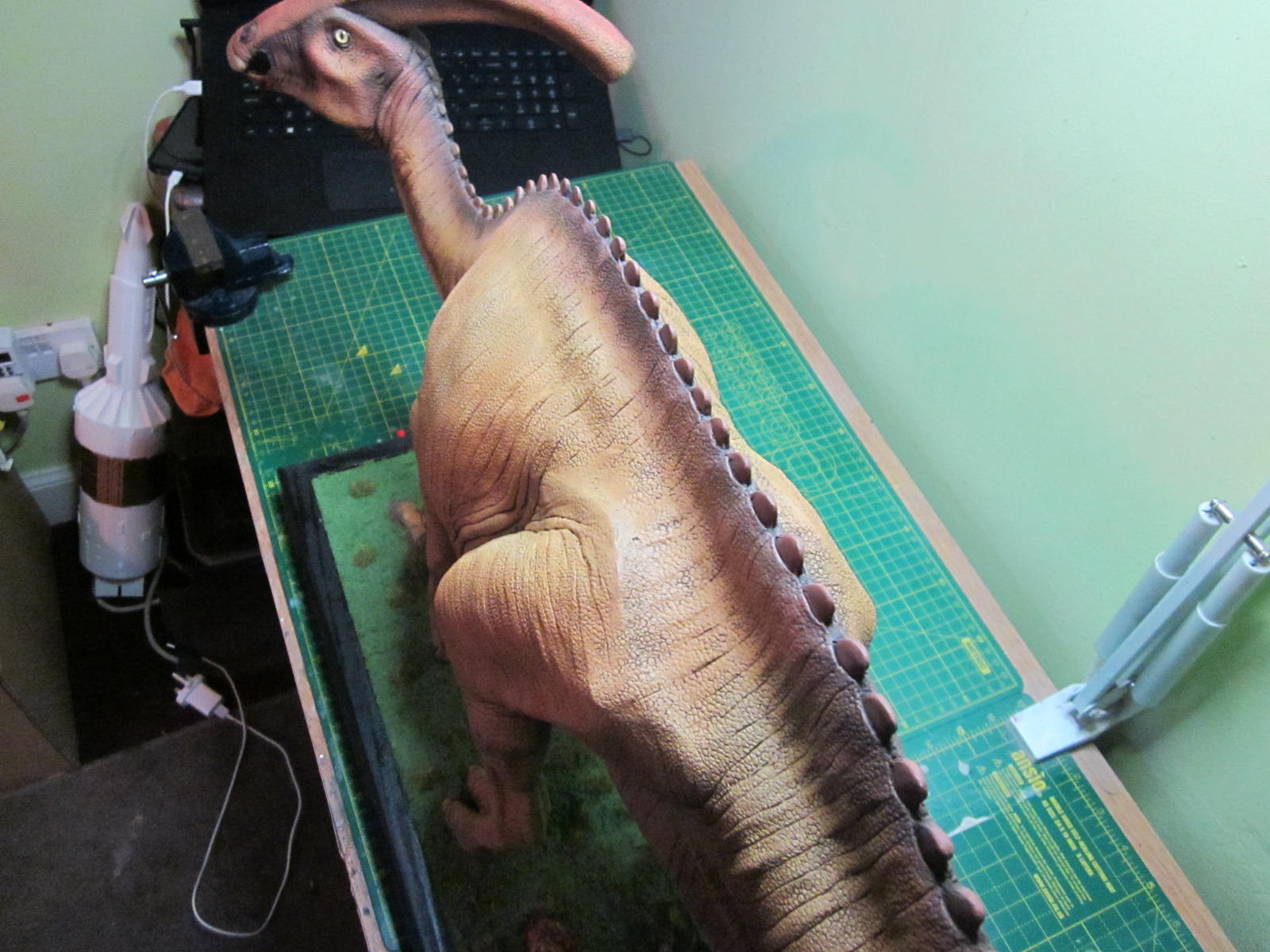 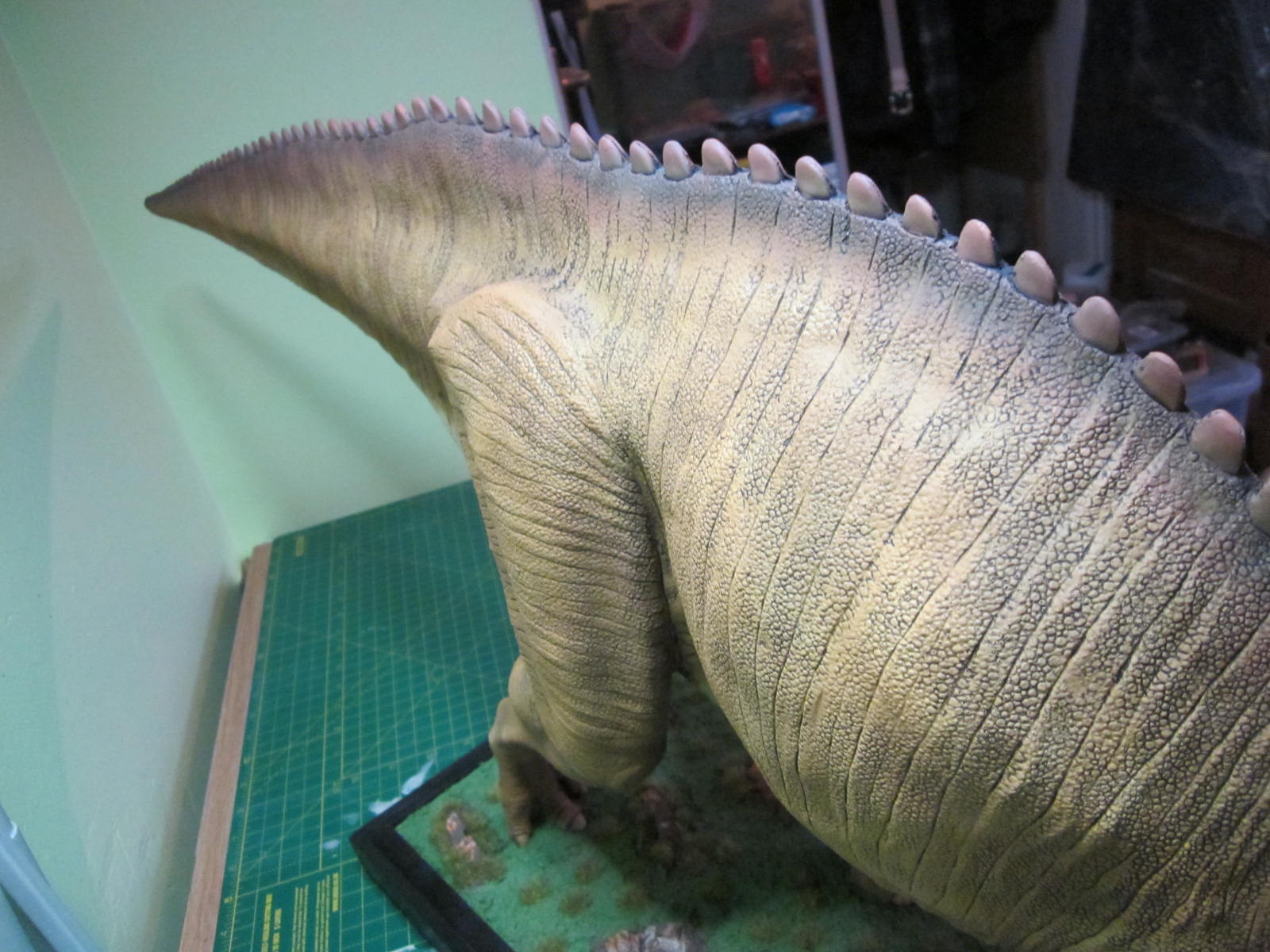 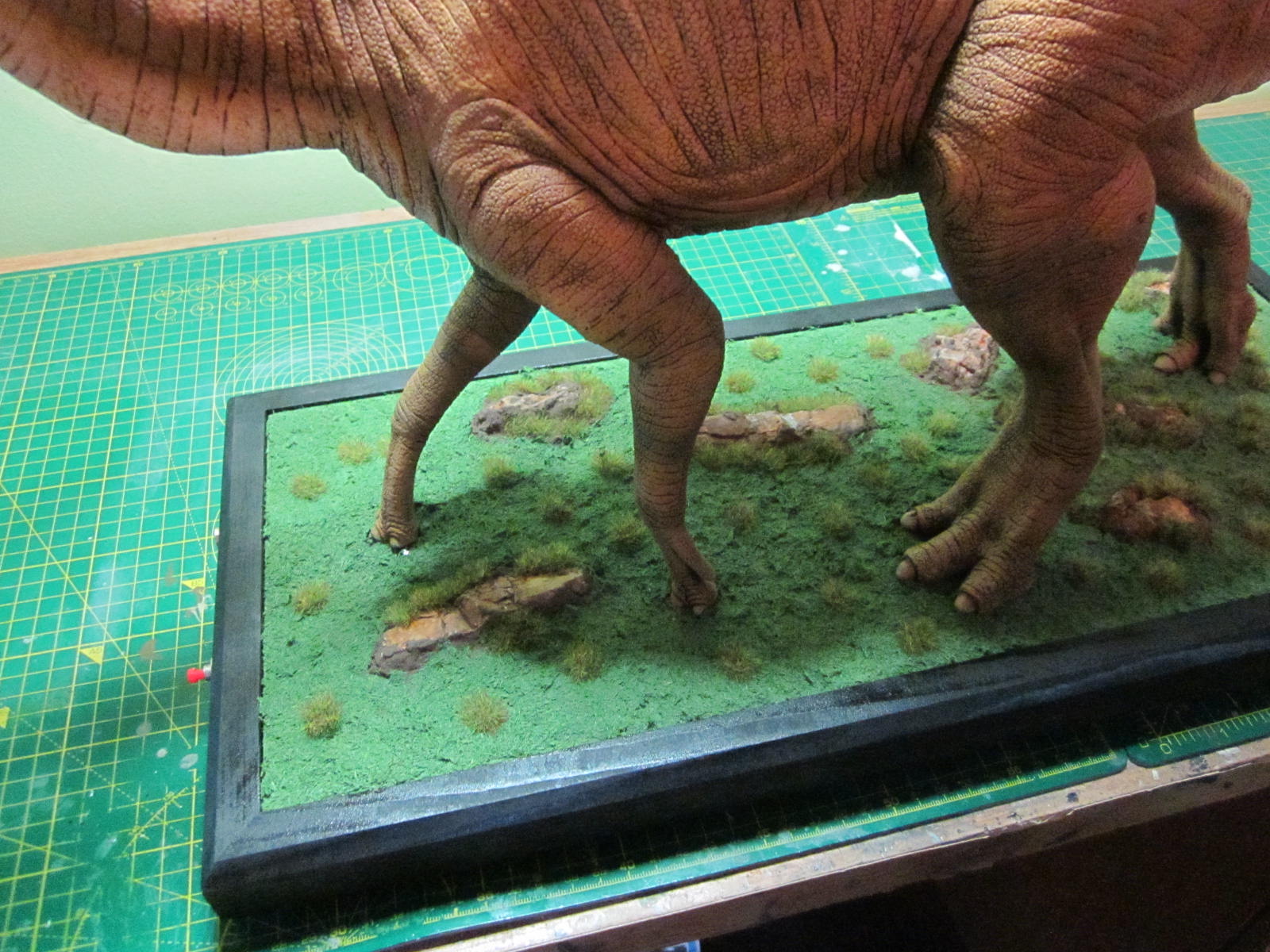 And as always a short video for you to listen to a "song" from the past. I hope you like her.

Thanks mate. Just about to start another Dino build after having so much fun putting this one together.
Iain

Awesome work for an awesome model!

I have about enough room for the Pegasus dinos, but I'm tempted by Masterpiece Models' 1/10 T-Rex.

Looking forward to the next build!
Top

I too would love to get the MM T-Rex as at 4ft long it truly would be a "monster". But TBH I wouldn't have anywhere to put it and I really struggled to get Dina painted and she's nearly the same size as that Rex kit. Just loving Dinosaurs just now and once I finish this reply I'll be starting a new WIP thread one another beastie.
Iain

That is some amazing paint work. bravo
.... Dirk